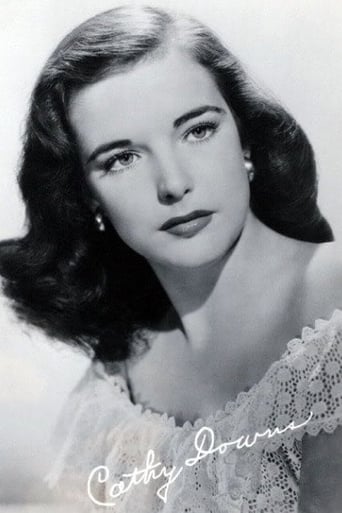 From Wikipedia, the free encyclopedia Cathy Downs (March 3, 1924 – December 8, 1976) was an American film actress. Born in Port Jefferson, New York, Downs began her film career with a small role in The Dolly Sisters (1945) and the following year played the title role in My Darling Clementine. Following the success of the latter, Downs was cast in a prison drama For You I Die (1947), an Abbott & Costello comedy The Noose Hangs High, and several western films. By the beginning of the 1950s she was appearing in lower budget films, including some science fiction films, with one of these films Missile to the Moon marking her last screen appearance, in 1958. She worked sporadically in television during the 1960s but was unemployed for several years before her death in Los Angeles, California. Downs has a star on the Hollywood Walk of Fame for her contribution to Television, at 6646 Hollywood Boulevard. Description above from the Wikipedia article Cathy Downs, licensed under CC-BY-SA, full list of contributors on Wikipedia.