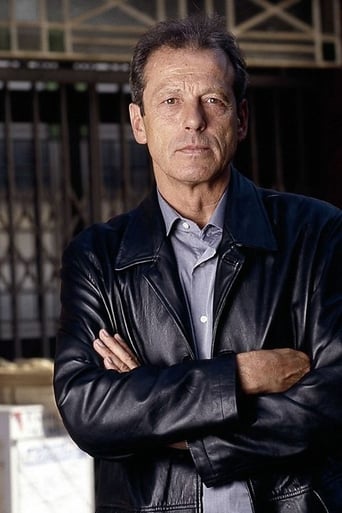 British actor Leslie Grantham shot to fame in 1985 as Den Watts, the original landlord of the Queen Vic, in the BBC soap opera EastEnders. The character quickly became a national favourite and gained the nickname Dirty Den mostly because of the way he treated his wife Angie, played by Anita Dobson, and the several affairs and nefarious activities he conducted. At Grantham's request the character was killed off in 1988, gunned down by the gangsters he had betrayed. He returned to the soap in 2003 where it was revealed Den faked his own death to live in exile in Spain. It was widely speculated that Grantham was lured back with a £500,000-a-year contract and some 17 million viewers watched his return - an impressive figure, but not as impressive as the 30 million who tuned in to watch Den divorce Angie on Christmas Day, 1986. Two years later, in 2005, Den Watts was killed off once and for all in an episode that drew in 16.2 million viewers. The reason for Grantham's exit this time was an online sex scandal, revealed by a Sunday newspaper a year earlier. This was not the first time Grantham had courted controversy of course. Not long after finding fame in the soap Grantham's past became front page news; on 3 December 1966, when was serving as a young British soldier in West Germany, he attempted to rob a taxi driver, Felix Reese, in Osnabrück A struggle between Grantham and the driver followed, and Reese died from a gunshot wound to the head.In his statement to the police following his arrest, Grantham said that he did not know the gun was loaded and it had gone off during the struggle, which would have resulted in a conviction for manslaughter if a jury believed this version of events. However, at his trial in 1967 he was subsequently convicted of murder and sentenced to life imprisonment. Although he had committed the murder in West Germany, he served the entirety of his imprisonment in various British prisons. This was because soldiers and officers convicted of any criminal offence that warrants a sentence of over two years are automatically transferred to Her Majesty's Prison Service, since they are also automatically dishonourably discharged. Grantham was released in 1977, having served 10 years. Whilst in prison, Grantham discovered acting and was encouraged by Labour politician T. Dan Smith and Doctor Who actress Louise Jameson to take up acting upon his release. Away from EastEnders, Grantham enjoyed a high profile career throughout much of the 1990s with the starring role of gangster Danny Kane in the BBC drama The Paradise Club, and maverick undercover cop Mick Raynor in 99-1. Other credits include the sci fi series The Uninvited (which he also produced), Fort Boyard, The Bill and The Stretch, which reunited him with Anita Dobson. He has also appeared in the films The Wedding Tackle, Charlie and Mob Handed, and starred in the titular role of The English Neighbour on Bulgarian TV in 2011. He died on the 15th June, 2018 in hospital following a short illness.