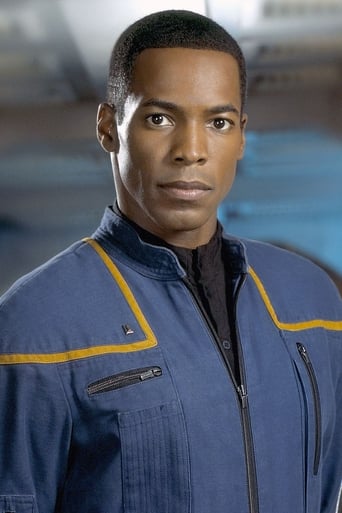 From Wikipedia, the free encyclopedia. Anthony T. Montgomery (born June 2, 1971, height 5' 10" (1,78 m)) is an American film and television actor. He is best known for his portrayal of Ensign Travis Mayweather on the UPN science fiction television series Star Trek: Enterprise (the fifth live-action series in the Star Trek franchise). Montgomery is the grandson of jazz musician Wes Montgomery. He graduated from Ball State University with a degree in performance theater and drama. Montgomery did stand-up comedy briefly after graduation, before moving to California. Sometimes credited as "A.T. Montgomery", his first starring role was in the horror-spoof Leprechaun: In the Hood (2000). He had a recurring role on the television series Popular before being cast in Star Trek: Enterprise in 2001. In 2004, he returned to the stage in Los Angeles, producing the show Dutchman by LeRoi Jones, as well as returning to stand-up comedy. In the summer of 2005, he returned to Indiana to star in theatrical fundraisers for charity. He also had a minor role as helmsman Geoff Corin in the PC Game Star Trek: Starfleet Academy (1997) Montgomery has produced one CD of his own music, What You Know About..., featuring four songs about Star Trek themes. He is a frequent guest at Star Trek conventions. Montgomery is a keen martial arts student, and a practitioner of Hapkido. He has also studied Koga Ryu Ninjutsu. In April 2007 Anthony Montgomery signed with the Germany based AGR Television Records. His (Hip-Hop) debut-album, titled A.T., was released in November 2008.   Montgomery starred in the film I'm Through with White Girls (The Inevitable Undoing of Jay Brooks) in 2007. In January 2009, Montgomery appeared in an episode of the Fox series House.