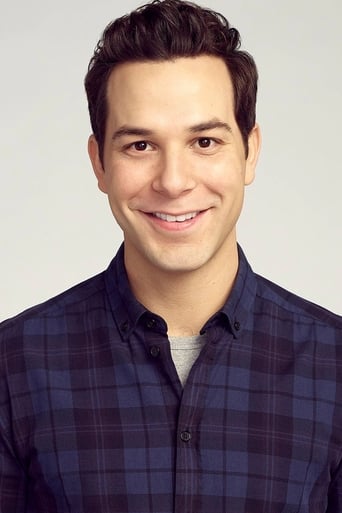 Skylar Astin is an American actor and singer. He is known for playing Georg in the Tony Award–winning stage musical Spring Awakening, and for his roles in the films Hamlet 2 (2008), Taking Woodstock (2009), Pitch Perfect (2012), and 21 & Over (2013). Astin was born in New York City and grew up in Rockland County, New York. He is the son of Meryl and Barry Lipstein.  He has a sister, Brielle, and two brothers, Milan and Jace.  Astin is Jewish.Having graduated from Clarkstown High School North, he attended Stagedoor Manor performing arts summer camp. He was also a student at the Tisch School of the Arts at New York University; but he took a leave of absence when cast in Spring Awakening.When he was fifteen, his agent selected his middle name, Astin, as his stage name. Astin performed (December 10, 2006-July 19, 2008) in Spring Awakening as Georg, a classmate of Melchior and Moritz, crushing on his piano teacher. Astin took on the role of Mark Cohen in a production of Rent, directed by Neil Patrick Harris, at the Hollywood Bowl (August 6-8, 2010). Astin played Rand Posin in the movie Hamlet 2. He sang "Raped in the Face" on the soundtrack with Phoebe Strole, his co-star in the film, and the film's star, Steve Coogan. Screenings of the film at the 2008 Sundance Film Festival led to Astin signing on with United Talent Agency. Astin joined the cast of the 2009 Adam Carolla sitcom Ace in the Hole on CBS. However, the show was not picked up by the network. In 2010, he joined the cast of the Jere Burns sitcom Strange Brew on Fox, which was also not picked up. Astin guest-starred as Ben in the July 2011 episode of Love Bites titled "Boys to Men" and, as Matt Kornstein, in the May 2012 episode of Girls entitled "Hannah's Diary". He also played a patient on House, Season 8, Episode 21, May 2012. Astin starred in the comedy film Pitch Perfect (2012) as the character Jesse Swanson and is set to reprise the role in the 2015 sequel Pitch Perfect 2. Astin also started in the comedy film 21 and Over (2013) as Casey. Astin currently stars in the TBS sitcom Ground Floor as Brody Moyer, a young ambitious money manager who falls for a girl on the ground floor.