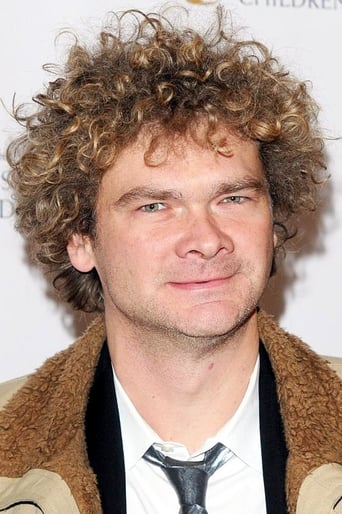 Simon Alexander Farnaby (born 2 April 1973) is an English actor, writer, and comedian. He is best known as a part of the TV series Horrible Histories (2009–2013), Yonderland (2013–2016) and Ghosts (2019–). He also starred in films such as Mindhorn (2016), Paddington (2014), and its sequel, Paddington 2 (2017) and Christopher Robin (2018). He is a long-time member of The Mighty Boosh (2004–2007) supporting cast, having had roles both in their series and co-starring in the quasi-spinoff film Bunny and the Bull (2009). He is also well known for his similarly offbeat characters in the CBBC live-action series of Horrible Histories, such as Caligula and the Grim Reaper. Other notable television work includes a recurring role on the sitcom Jam & Jerusalem (2006–2009) and co-starring as eccentric neighbour Sloman on The Midnight Beast's (2012–) TV series. He previously had a very brief role in Coronation Street in the 1990s. Along with the five other principal members of the cast of Horrible Histories, Farnaby is also the co-creator, writer and star of Yonderland, an eight-part family fantasy comedy series that premiered on Sky One on 10 November 2013. He co-starred with the same troupe in Bill, a 2015 BBC comedy film based loosely around the early life of William Shakespeare. In 2013, he presented a documentary entitled Richard III: The King in the Car Park, tracing the discovery and identification of the remains of the last Plantagenet king. The next year, he presented another Channel 4 documentary series entitled Man Vs Weird, in which he travelled the world investigating people who claim superhuman abilities. In 2016, he co-wrote Mindhorn with Julian Barratt, a comedy about Richard Thorncroft (Barratt). He also has a small acting role as Clive Parnevik. In December 2016, he had a small role in Rogue One, as an X-Wing Pilot. In 2017, he co-wrote Paddington 2 with Paul King. He had a small role in both the first film and its sequel. Description above is from the Wikipedia article Simon Farnaby, licensed under CC-BY-SA, full list of contributors on Wikipedia.