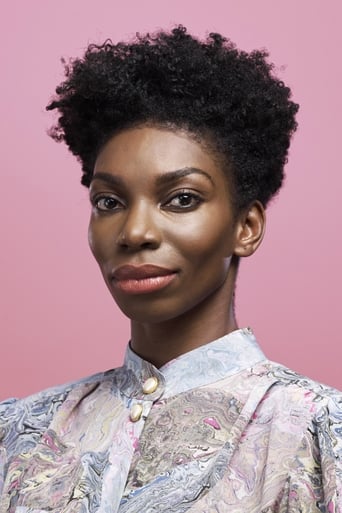 Michaela Ewuraba Boakye-Collinson, known professionally as Michaela Coel, is a British actress, screenwriter, director, producer, singer, songwriter, poet and playwright. She is best known for creating and starring in the E4 sitcom Chewing Gum (2015–2017), for which she won the BAFTA Award for Best Female Comedy Performance, and the BBC One/HBO comedy-drama series I May Destroy You (2020). Coel was born in London on 1 October 1987. Her parents are Ghanaian. She and her older sister grew up in London, primarily Hackney and Tower Hamlets with heir mother. Her parents had separated before her birth. She attended Catholic schools in East London, and has said that her isolation as the only black pupil in her age cohort at primary school caused her to bully other pupils. The isolation stopped when she took her secondary education at a comprehensive school. From 2007 to 2009, Coel attended the University of Birmingham, studying English Literature and Theology. She took a Ché Walker masterclass at RADA after meeting Walker at open mics. In 2009, she transferred to the Guildhall School of Music and Drama, where she was the first black woman enrolled in five years. She won the Laurence Olivier Bursary award, which helped her fund her schooling. During her time at Guildhall, she attended the Mark Proulx workshop at Prima del Teatro and took the Kat Francois Poetry Course at the Theatre Royal Stratford East. She graduated from the Guildhall School of Music and Drama in 2012. This page is based on a Wikipedia article written by contributors. Text is available under the CC BY-SA 4.0 license; additional terms may apply.