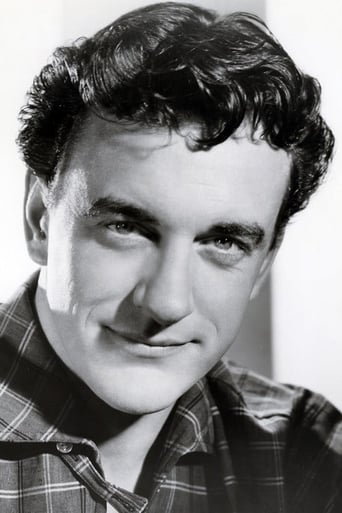 The star of one of the longest-running shows in U.S. television history, Gunsmoke (1955). Born of Norwegian heritage (the family name, Aurness (formerly had been Aursness) in Minneapolis, Minnesota to Rolf and Ruth Duesler Aurness. His father was a traveling salesman of medical supplies and his mother later became a newspaper columnist. James attended West High School in Minneapolis. Although he appeared in school plays, he had no interest in performing, and dreamed instead of going to sea. After high school, he attended one semester at Beloit College before receiving his draft notice in 1943. He entered the army and trained at Camp Wheeler, Georgia, before shipping out for North Africa. After landing at Casablanca, Arness joined the 3rd Infantry Division in time for the invasion of Anzio. Ten days after the invasion, Arness was severely wounded in the leg and foot by German machine-gun fire. His wounds, which plagued him the rest of his life, resulted in his medical discharge from the army. While recuperating in a Clinton, Iowa hospital, he was visited by his younger brother Peter (later to gain fame as actor Peter Graves), who suggested he take a radio course at the University of Minnesota. James did so, and a teacher recommended him for a job as an announcer at a Minneapolis radio station. Though seemingly headed for success in radio, he followed a boyhood friend's suggestion and went with the friend to Hollywood in hopes of getting work as film extras. He studied at the Bliss-Hayden Theatre School under actor Harry Hayden, and while appearing in a play there was spotted by agent Leon Lance. Lance got the actor a role as Loretta Young's brother in The Farmer's Daughter (1947). The director of that film, H.C. Potter, recommended that he drop the "u" from his last name and soon thereafter the actor was officially known as James Arness. Little work followed this break,  He appeared in a production of "Candida", and married his leading lady, Virginia Chapman. He began to get small roles with frequency, often, due to his size, villainous characters. Most notable among these was that of the space alien in The Thing from Another World (1951). While playing a Greek warrior in a play, Arness was spotted by agent Charles K. Feldman, who represented John Wayne. Feldman introduced Arness to Wayne, who put the self-described 6' 6" actor under personal contract. Arness played several roles over the next few years for and with Wayne, whom he considered a mentor. In 1955, Wayne recommended Arness for the lead role of Matt Dillon in the TV series Gunsmoke (1955). (Contrary to urban legend, Wayne himself was never offered the role.) Arness at first declined, thinking a TV series could derail his growing film career, but Wayne argued for the show, and Arness accepted. After the cancellation of "Gunsmoke" in 1975, Arness took on another successful Western project, "How The West Was Won." A brief modern police drama, McClain's Law (1981), followed, and Arness played his mentor John Wayne's role in Red River (1988), a remake of the Wayne classic.