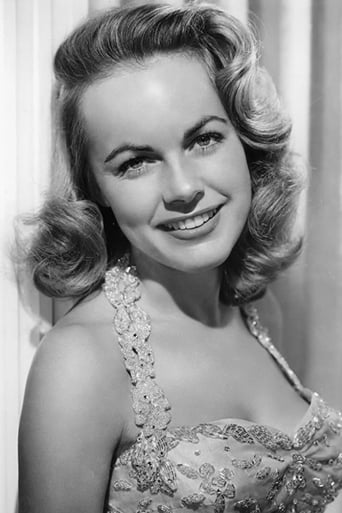 Born Helen Luella Koford on January 7, 1929, the Los Angeles, California native worked as a model before she made her film debut at age 11 in 20th Century Fox's Maryland (1940). Throughout the 1940s, she worked under a variety of names (her own, Judy Ford and January Ford) before settling on Terry Moore in 1948. Placed under contract by Columbia, Moore was loaned out to RKO for one of her most famous films, RKO's Mighty Joe Young (1949); she received an Academy Award nomination for her performance in Paramount's Come Back, Little Sheba (1952). In the 1970s, she was in the news more than she was in motion pictures, asserting that she was the secret wife of the late billionaire Howard Hughes. She has starred in 77 feature films and listed among her leading men are Hollywood's leading legends; including Burt Lancaster, John Wayne, Cary Grant, Tyrone Power, Glenn Ford, Mickey Rooney and Robert Wagner. Since she was a pilot herself, Terry played a major role in preparing Leonardo DiCaprio for his portrayal of Howard Hughes in The Aviator (2004).