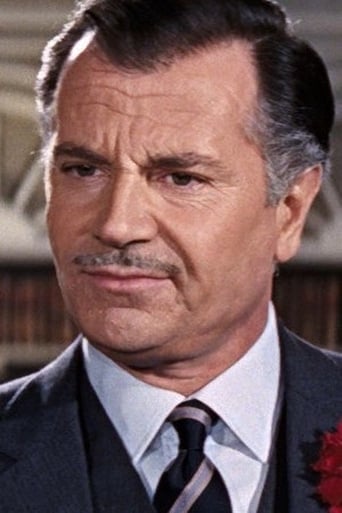 ​From Wikipedia, the free encyclopedia.   Gabriele Ferzetti (born Pasquale Ferzetti on 17 March 1925 in Rome, Italy) is an Italian actor. He has more than 160 credits to his name across film, television and stage. His career was at its peak in the 1950s and 1960s. A prominent figure in Italian cinema since the 1950s, Ferzetti's first leading role came in 1950 in the film Lo Zappatore. He portrayed Puccini twice in 1953 and 1954 in the films Puccini and Casa Ricordi respectively. Ferzetti made his international breakthrough in 1960 in his most acclaimed role as an oversexed, restless playboy in Michelangelo Antonioni's controversial L'avventura. After a series of romantic performances, he acquired a reputation in Italy as an elegant, debonair and a somewhat aristocrat-looking leading man. In 1966, Ferzetti starred as Lot in John Huston's biblical epic, The Bible: In the Beginning. In 1968, he played railroad baron Morton in Sergio Leone's celebrated Once Upon a Time in the West. A year later, he appeared in the James Bond movie On Her Majesty's Secret Service as Marc Ange Draco, perhaps his best known role internationally, though his voice was dubbed by British actor David de Keyser. He is well- known to non-mainstream audiences for the role that he played as the psychiatrist, Hans, in Liliana Cavani's arthouse classic The Night Porter (1974). In the 1970s he appeared in a significant number of crime films, often as an Inspector. He also appeared in Julia and Julia, opposite Sir Laurence Olivier in Inchon (1982) and the cult film First Action Hero. More recently he played the role of Nono in the TV series Une famille formidable and appeared in Luca Guadagnino's 2009 film I Am Love. Description above from the Wikipedia article Gabriele Ferzetti licensed under CC-BY-SA, full list of contributors on Wikipedia.