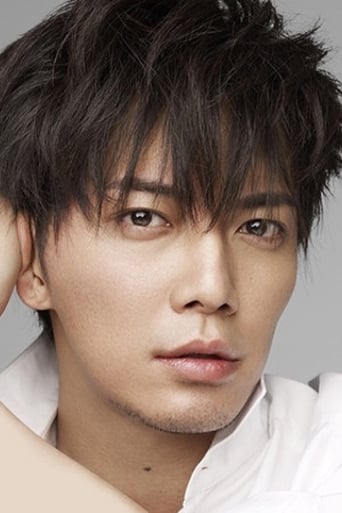 Narimiya Hiroki, born Narimiya Hiroshige, is a Japanese actor and model. His parents divorced when he was young, and in his 3rd year of junior high school, his mother died, and he and his brother were raised by his grandmother. He had made a promise to his mother to become serious about acting and soon dropped out of school to pursue his career. He soon debuted in 2000 in the play "Horobikaketa Jinrui, Sono Ai no Honshitsu to wa (Perishing Humankind, What is the Essence of Its Love?)". Hiroki was chosen for the part of Kane out of the 3000 actors who auditioned. In February 2001, he made his movie debut in "Oboreru Sakana". In 2002, he appeared as Noda in the television drama, "Gokusen". With his life-sized performance in this role, Hiroki won both serious acclaim and popularity. In 2003, he performed in his first-period film, "Azumi", which became a box office hit and allowed Hiroki to display his swordplay skills from daily training. On December 2, 2016, Narimiya announced retirement from the entertainment industry following allegations of illicit drug use. The drug allegations were never confirmed, but Hiroki insisted on retiring. He is currently devoting himself to other personal artistic projects, but not in the field of acting. More information can be found on his website and on his twitter account.