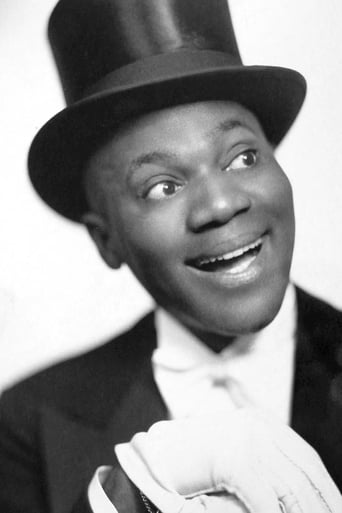 According to one jazz dance source, Bill 'Bojangles' Robinson was the chief instigator for getting tap dance "up on its toes." Early forms of tap, including the familiar "buck and wing", contained a flat-footed style, while Robinson performed on the balls of his feet with a shuffle-tap style that allowed him more improvisation. It obviously got him noticed and it certainly made him a legend. Born Luther Robinson in Richmond, Virginia, on May 25, 1878, he was orphaned in infancy and reared by a grandmother. He took his brother Bill's name for his own once he went professional. His brother, in turn, took the name Percy and later became a renowned drummer. Hoofing in beer gardens at age 6, Bojangles joined traveling companies and vaudeville tours in his teens and slowly built up a successful reputation in nightclubs and musical comedies. He headlined with Cab Calloway many times at the famous Cotton Club in Harlem. Bojangles' unique sound came from using wooden taps and his direct claim to fame would be the creation of his famous "stair dance," which involved tapping up and down a flight of stairs both backwards and forwards. Both black and white audiences were taken by his style and finesse and, following the demise of vaudeville, he easily transferred his talents to Broadway. Lew Leslie, a white producer, put together "Blackbirds of 1928," an all-black revue that would prominently feature Bill and other black musical talents. From there it was films for the now old-timer. In the 1930s various studios usurped his patented talent in their old-fashioned Depression-era musicals. Times being what they were, he was typically cast as a butler or servant. Nevertheless, he enjoyed immense popularity, especially when partnered with reigning #1 box office moppet Shirley Temple. Bojangles would be featured in four of Shirley's sentimental vehicles: The Little Colonel (1935) (in which he recreated his "stair dance" with her), The Littlest Rebel (1935), Just Around the Corner (1938) and Rebecca of Sunnybrook Farm (1938). In addition, he assisted in the choreography on one of her other films, Dimples (1936). For the most part Bill was a specialty player, but every once in a while he got into the thick of things, playing Lena Horne's love interest in One Mile from Heaven (1937) for instance. Still tapping his heart out as a 60-year-old, Bojangles returned to the stage in "The Hot Mikado" which was a tuneful jazz reworking of Gilbert and Sullivan's classic operetta. Suffering from a chronic heart condition, he slowed down in the mid-'40s and died in New York City in 1949 of heart disease.