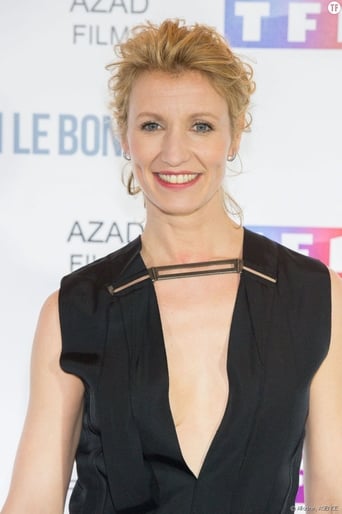 Alexandra Lamy (born 14 October 1971) is a French actress. Lamy was born in Villecresnes, near Paris, but grew up in Languedoc-Roussillon. When she was six months old, her parents, Michel and Michèle, moved the family to La Grande-Motte in Southern France. A few years later, her family moved again to Alès, where her father ran a fabric shop. She fell in love with theatre while performing in school plays. She later moved to Paris to begin her career, where she worked to lose her southern French accent. Her sister, Audrey Lamy, is also an actress and currently stars in the French sitcom Scènes de ménage. Their cousin is the politician François Lamy. From 1999–2003, she starred in Un gars, une fille. Lamy started dating her Un gars, une fille costar Jean Dujardin in 2003. They married in 2009, and divorced in 2013. She was previously in a relationship with actor Thomas Jouannet from 1995 to 2003, with whom she had a daughter, Chloé, born in October 1997. Source: Article "Alexandra Lamy" from Wikipedia in english, licensed under CC-BY-SA 3.0.