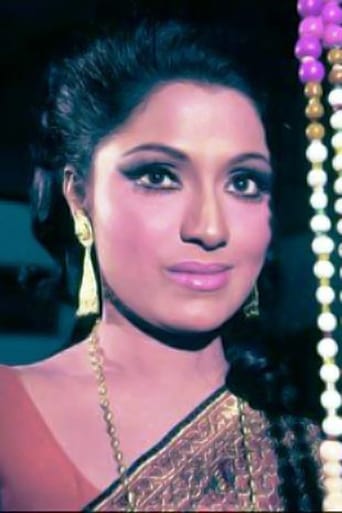 Bindu had early successes with Ittefaq and Do Raaste in 1969. From here she went on to write her success story with Shakti Samanta's Kati Patang (1970), where she had a sizzling cabaret dance, "Mera Naam Shabnam" to her credit; a number which is even today remembered as one of the highlights of the film. Bindu's mesmerising performances in 1974 as a seductress in Imtihan, and as a nymphomaniac in Hawas, left audiences asking for more. With a string of hits behind her, she successfully managed to break out of the myth that married actresses usually do not go to become sex symbols, especially in the Hindi film industry. She is the third point in the 'holy trinity' of item number queens. Along with Helen and Aruna Irani, Bindu defined the Bollywood 'cabaret' dance number and the role of the 'Vamp'. Her acting ability was seen in films like Hrishikesh Mukherjee's films Arjun Pandit and Abhimaan, where she won raves for playing a very sympathetic character. She proved to be just as convincing as the crippled woman in Chaitali and as the deglamorised role of wife to Ashok Kumar, in Arjun Pandit. She played the villain's moll in Zanjeer and became famous as Mona Darling. An impending pregnancy, followed by a miscarriage, brought about a lull in her career and on the advice of her doctors she had to end her stint as the glamorous 'vamp' – dancing and all. However, she did not stay away for long and returned to the silver screen with character roles – Hero, Biwi Ho To Aisi and Kishen Kanhaiya and with many other such movies she managed to re-establish herself as the unmerciful and cruel mother-in-law, or the cynical aunt. In the later stages of her career, she made fewer on-screen appearances, like the ones in Shola Aur Shabnam, which highlighted her comic side, and followed with other light and funny performances in Hum Aapke Hain Koun..!, Main Hoon Na, and Om Shanti Om.