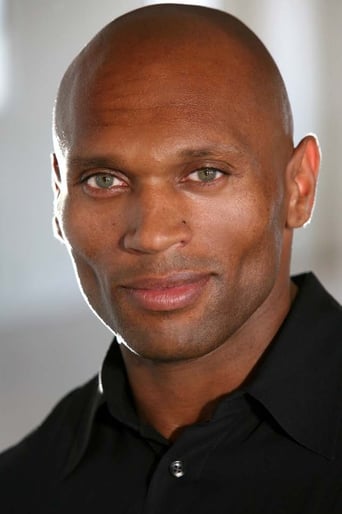 Mark was born in London in 1969, however he has a hugely colorful heritage —Jamaican, Cherokee Indian, Ghanaian, White and Chinese. This mix along with his green eyes has given him a very a distinctive look. Mark first catapulted onto our screen as Rhino in the massive ITV series, Gladiators where he reigned for five years. His champion body building background led him to the show. At the age of seventeen Rhino was inspired to take up bodybuilding. His dedication to the art soon reaped him many titles including 'London Men's Heavy Weight Champion', Junior British champion. His aggressive style earned him his nickname - Rhino. His natural good looks and distinctive green eyes ensured he stood out and it wasn't long before he came to the attentions of LWT Gladiators. He eventually become one of the shows most loved and undefeated characters. He has continued to be a very physical person, boxing competitively and recently completing four Marathons for Charity. Rhino has gone on to appear in many films and TV dramas. Mark's film work includes the blockbuster Batman Begins directed by Christopher Nolan for Warners, Pirates of the Caribbean 4, Argo where he played the Evil Villain, also No Good Deed for Screen Gems. He also starred in the highly acclaimed British Gangster film Rollin with the Nines. He has appeared in a number of TV drama's including Eastenders, Hustle, The Bill. Other TV work includes BBC's Synchronicity and the Lynda La-Plante production, Trial and Retribution for ITV. He was also part of the cast for the BBC's series Robin Hood series in which he played an Arabian knight called Karim.