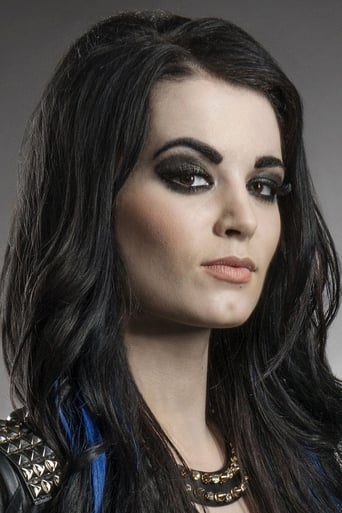 Saraya-Jade Bevis (born 17 August 1992), better known by the ring name Paige, is an English retired professional wrestler. She is currently signed to WWE, however her duties are unknown as she has not actually appeared on television since October 2019. She is a two-time (and the youngest) WWE Divas Champion. She was the inaugural NXT Women's Champion on WWE's brand NXT, holding the championship for 301 days. She is the only woman to ever hold both Divas and NXT Women's Championships simultaneously. In 2005, at the age of 13, Bevis made her debut under the ring name Britani Knight for her family's World Association of Wrestling promotion. She went on to hold several championships on the European independent circuit. After talent scouting in England, WWE signed Bevis in 2011, and she began wrestling in its developmental systems, debuting on Florida Championship Wrestling in 2012 and later going on a winning streak in NXT. In her 2014 debut match on the main roster, she won the Divas Championship at the age of 21, becoming the youngest Divas Champion in history. In 2015 and 2016, Paige went on hiatus due to injury, undergoing neck surgery in October 2016. In December 2017, she suffered an impact injury to the neck at a match, preventing her from competing further. Paige formally retired from in-ring competition in 2018 due to injury, at age 25. She is a contributor to WWE-related programs and has fulfilled managing roles. Paige ranked No. 1 in Pro Wrestling Illustrated's Female 50 and was named Diva of the Year by Rolling Stone in 2014. In 2018, she received the WWE Year-End Award for General Manager of the Year. In 2012, Channel 4 produced a documentary about Paige and her family, The Wrestlers: Fighting with My Family, which was adapted into the 2019 feature film Fighting with My Family. Description above from the Wikipedia article Paige (wrestler), licensed under CC-BY-SA, full list of contributors on Wikipedia.