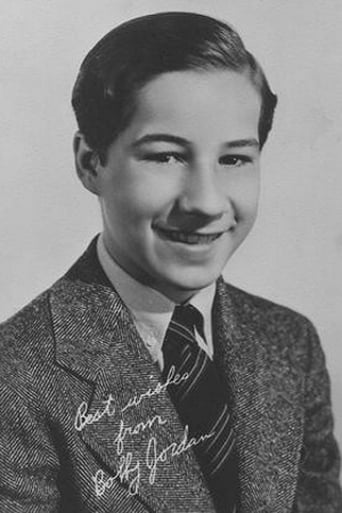 Though he was the youngest, Jordan was the first of the boys who made up the Dead End Kids to work in films with a role in a 1933 Universal short. In 1935, he became one of the original Dead End Kids by winning the role of Angel in Sydney Kingsley's Broadway drama Dead End about life in the slums of the east side of New York City. The play was performed at the Belasco Theatre and ran for three years with over 600 performances. He appeared for the first season and the beginning of the second but left in mid-November 1936. He returned in time to join the others in 1937 in Hollywood, California to make the movie version of the play, starring big names such as Humphrey Bogart, Joel McCrea, Sylvia Sidney, and Claire Trevor. Following the making of Dead End, Jordan found himself "released" from his contract at Goldwyn, and, subsequently, he appeared at Warner Brothers with the rest of the Dead End Kids. After one year, Warners released most of them, but kept Leo Gorcey and Jordan as solo performers. Jordan appeared (as "Douglas Fairbanks Rosenbloom") in Warner's Damon Runyon comedy A Slight Case of Murder (1938) and at Metro-Goldwyn-Mayer in Young Tom Edison (1940). In 1940, Jordan appeared in the film Military Academy and accepted an offer from producer Sam Katzman to star in a new tough-kid series called "The East Side Kids." Leo Gorcey soon joined him, then Huntz Hall, and the trio continued to lead the series through 1943, when Jordan entered the United States Army during World War II as a foot soldier in the 97th Infantry Division. He was subsequently involved in an elevator accident, when the elevator fell five floors, that forced him to have surgery to remove his right kneecap.