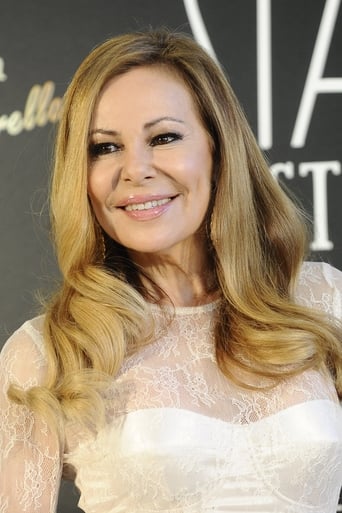 Ana Obregón (born March 18, 1955 in Madrid, Spain as Ana Victoria García Obregón) is a Spanish actress, celebrity and socialite. She obtained a Bachelor of Sciences in Biology (specialized in Zoology) from the Universidad Complutense de Madrid . Obregón has appeared in films from countries including Spain, France, United States and Italy but she is best known for her high-profile personal life and her career as a television actress most notably for her performances in the Spanish television series A las once en casa and Ana y los siete. She is best known to American audiences for her role as Bo Derek's sidekick in 1984's Bolero. She also appeared in an episode of Who's the Boss, playing Ana, Tony Miceli's Italian cousin. She also Co-starred in the 1983 3-D action adventure film Treasure of the four crowns with Tony Anthony. A staple of the Spanish prensa rosa or gossip press, Obregón is also famous in Spain and Britain for a long relationship with Croatia striker Davor Šuker as well as a supposed liaison with the Real Madrid and England international football player David Beckham. This led to a spat with Beckham's wife Victoria who famously referred to the 50-year old as a "geriatric Barbie". Obregón later denied any sexual misconduct on her part, but sued instead. Obregón found herself in the midst of controversy in 2007 following information disclosed by Interviú, and subsequently published by the major newspapers in Spain: according to said media, an ostensibly distraught Obregón allegedly called her bodyguard Eloy Sánchez Barba in order to ask him to hire third parties to beat up or physically assault journalist Jaime Cantinzano, in reprisal for what she deemed an unacceptable public exposal of her teenage son. According to these sources of information, she said: "... but I don't want this done by just anyone, I want you to have los Miami doing this", in reference to a well-known criminal group established mainly in Madrid.Unbeknownst to her and Sánchez Barba, the latter's telephone line had been tapped by the Spanish police in connection to their investigation of a hit job presumably coordinated by Sánchez Barba months before. Description above from the Wikipedia article Ana Obregón, licensed under CC-BY-SA, full list of contributors on Wikipedia.