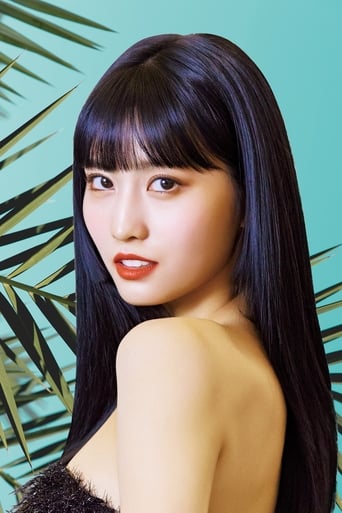 Hirai Momo (Hangul: 히라이 모모, Japanese: 平井もも／ひらいもも), better known as Momo (Hangul: 모모), is a Japanese singer and dancer, active in South Korea. She is the third oldest member of the K-pop girl group, TWICE, as the main dancer, vocalist, and sub-rapper. She was born in November 9, 1996 in Kyotanabe, Kyoto, Japan. Her family consists of her parents and older sister by two years, Hana Hirai. She started dancing at a very young age and decided to become a singer because of Amuro Namie and got into K-pop after watching Rain and Lee Hyori. Throughout her young life, she trained at the Step Out Dance Studio and was scouted by JYP Entertainment after they saw a dance video of her and her older sister. She and her sister were invited to the 2011 JYP Japan Audition which were held in Osaka (19/11/2011) and Tokyo (25/11/2011). Momo passed the audition, her sister did not. Subsequently, she moved to South Korea to start her JYP traineeship on April 13 2012 together with TWICE's Sana. In 2014, she appeared in the music video of Got7's "Stop Stop It" and the Japanese MV of Junho's "Feel". In the following year, "R.O.S.E" and miss A's "Only You." In 2015, Momo became a contestant on the reality girl group survival show, Sixteen. Originally, eliminated in the sixth episode of the series, she was brought back by JYP in the show's finale, due to him believing that her skills in dance and performance would complete his girl group, which was named TWICE.