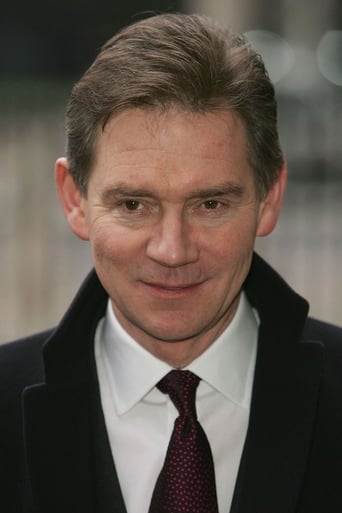 Anthony Andrews made his West End theater debut at the Apollo Theatre as one of twenty young schoolboys in Alan Bennett's "Forty Years On" with John Gielgud. He began his career at the Chichester Festival Theatre in the UK. His theater credits include spells with the New Shakespeare Company - "Romeo and Juliet" and "A Midsummer Night's Dream". The Royal National Theatre production of Stephen Poliakoff's "Coming in to Land" with Maggie Smith, directed by Peter Hall, the much-acclaimed Greenwich Theatre production of Robin Chapman's "One of Us" and, as "Pastor Manders", in Robin Phillips's highly acclaimed production of Henrik Ibsen's "Ghosts" at the Comedy Theatre in London, produced by Bill Kenwright. Anthony's first television appearance was in The Wednesday Play: A Beast with Two Backs (1968) by Dennis Potter, which was part of The Wednesday Play (1964) series. His first leading role in a series was as the title character in the BBC's The Fortunes of Nigel (1974) by Sir Walter Scott. Subsequently, he distinguished himself in various television classics playing "Mercutio" in Romeo & Juliet (1978) and starred in three different plays in the "Play of the Month" (1976) series, including playing "Charles Harcourt" in "London Assurance". He also starred in Danger UXB (1979), in which he played bomb disposal hero "Brian Ash". Most famously, he received worldwide recognition for his portrayal of the doomed "Sebastian Flyte" in Brideshead Revisited (1981) for which he won a BAFTA in the UK, the Golden Globe award in the USA and an Emmy nomination for Best Actor. Anthony's since gone on to star in Jewels (1992), for which he received another Golden Globe nomination. Most recently, Anthony has received tremendous acclaim for his outstanding portrayal of "Count Fosco" in "The Woman In White" at the Palace Theatre in London's West End. As a producer, he co-produced Lost in Siberia (1991), which translates as "Lost in Siberia", filmed entirely in Russia, which received a Golden Globe nomination for Best Foreign Film and Haunted (1995), produced by his own production company, Double 'A' Films.