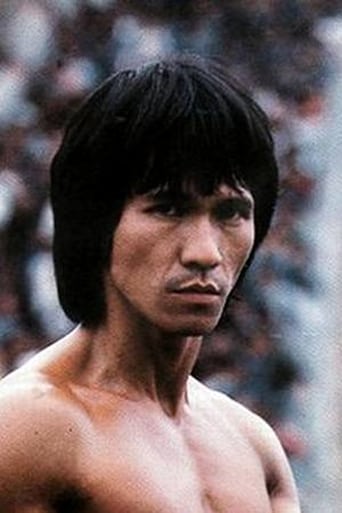 Often called Bruce Le for Bruceploitation purposes. Huang Kin-Lung was a contract player for the Shaw Brothers, where he appeared in the science fiction opus Infra-Man. He did not spend much time with the Shaws, however, and quickly went on to making Bruce Lee inspired "tribute" films Born in Burma, Half Chinese Half Burmanese, he was educated in Rangoon when he was young. With this proficiency in martial arts, he started learning Hong Quan, White Crane, and Karate when he was 11 years old. Later Huang left Burma for Macau, where he founded a martial arts training school with some friends. His students came from Hong Kong and Macau. Veteran director Wang Feng was impressed by his skills in martial arts and invited him to join Shaw Brothers to play the role of Kuai Chueh Chi (literally "Ghost-foot Seven"), a disciple of the kung fu master Huang Fei-hung, in "Rivals in Kung Fu". In the late 1970s, Huang left Shaw Brothers and adopted the stage name of Lu Xiao-Long to continue his movie career. He played lead in various kung fu movies such as "My Name Called Bruce", "Enter the Game of Death" and "Bruce & The Dragon Fist". In 1992 he directed "Comfort Women".