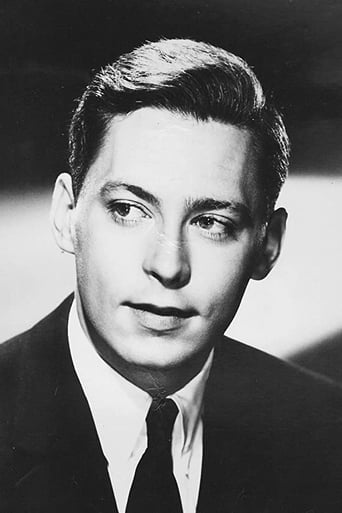 John Grinham Kerr (November 15, 1931 – February 2, 2013), was an American actor and lawyer. He made his Broadway debut in 1953 in Mary Coyle Chase's Bernardine, a high-school comedy for which he won a Theatre World Award. In 1953-54, he received critical acclaim as a troubled prep school student in Robert Anderson's play Tea and Sympathy. In 1954, he won a Tony Award for his performance, and he starred in the film version in 1956. Kerr's first television acting role was in 1954 on NBC's Justice as a basketball player who believes that gamblers have ruined his success on the court. His mother appeared with him on the series, which focuses on the cases of attorneys with the Legal Aid Society of New York. He made The Cobweb for MGM, who liked his work so much they co-starred him with Leslie Caron in Gaby (1956), the third remake of Waterloo Bridge, which, in its original pre-Code 1931 version, featured John's grandfather, actor Frederick Kerr. Kerr starred with Deborah Kerr (no relation) in Tea and Sympathy in 1956. In a widely publicized decision in 1956, Kerr declined to play the role of Charles Lindbergh in The Spirit of St. Louis because he did not respect Lindbergh's early support of the Nazi regime in Germany prior to America's entry into World War II. "I don't admire the ideals of the hero", Mr. Kerr told The New York Post. The part went to James Stewart. Kerr had a major role in the film version of Rodgers and Hammerstein's South Pacific (1958), playing Lt. Joe Cable, the newly arrived marine about to be sent on a dangerous spy mission. In The Crowded Sky (1960), Kerr played a pilot who helps the Captain (Dana Andrews) steer a crippled airliner back to earth. Another film appearance was in Roger Corman's The Pit and the Pendulum (1961). In 1963, Kerr had a continuing role on Arrest and Trial, playing Assistant DA Barry Pine. During the 1960s, Kerr guest starred on several TV series including The Alfred Hitchcock Hour, Rawhide, Gunsmoke and Adam-12. He had a regular role on the ABC-TV primetime TV series, Peyton Place, playing District Attorney John Fowler during the 1965-66 season. Also in 1964-65 he appeared as guest star on several episodes of Twelve O'Clock High. In the 1970s, Kerr had a recurring role as prosecutor Gerald O'Brien on The Streets of San Francisco and he made guest appearances in several other TV programs including The Mod Squad, Columbo, McMillan and Wife, Barnaby Jones and The Feather and Father Gang. Kerr's last acting appearance was a minor role in The Park Is Mine (1986), a made-for-TV movie starring Tommy Lee Jones.