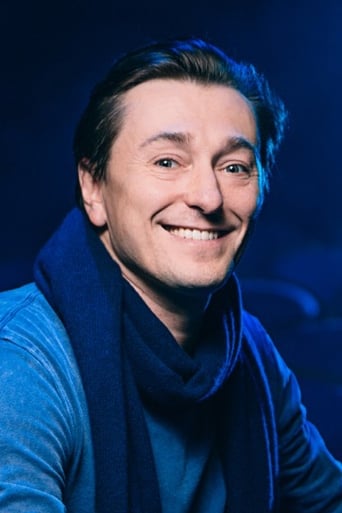 Sergey Vitalyevich Bezrukov (Russian: Серге́й Вита́льевич Безру́ков) is a Russian screen and stage actor, People's Artist of Russia, and the laureate of the State Prize of the Russian Federation. He currently works at Tabakov Studio (the theatre of Oleg Tabakov). Sergey Bezrukov is the son of actor Vitali Bezrukov, graduated from Moscow Art Theatre, and made his cinema debut in Nocturne for Drum and Motorcycle. Since 1994 he has played a wide range of characters in Russian films and mini-series, such as Ivan Brilling in Azazel, Kappel in Admiral, Vladimir Vysotsky in Vysotsky Thank You for Being Alive, Sergei Yesenin in Yesenin, and most recently Sumarokov in The Strict Routine Vacations.  He also performs as a voice actor, giving life to titular character Prince Vladimir in the animated film, and providing voices for Russian television series Kukly.    Throughout the 2000s, Bezrukov has portrayed numerous Russian historical figures, notably Alexander Pushkin, regarded by some to be Russia’s premiere poet.  According to the survey of ROMIR Monitoring, in Russia he was called the favourite actor of 2005. In March 2014, Bezrukov invited controversy when he signed a letter of support for President Vladimir Putin’s military occupation of the Ukraine’s Crimean Peninsula.