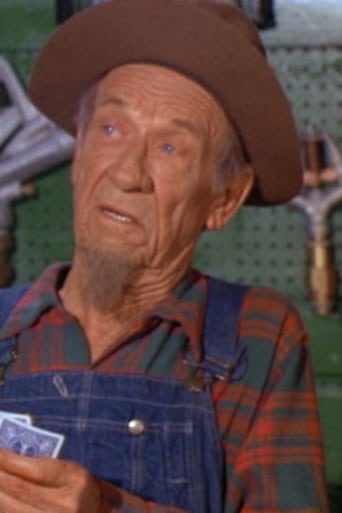 Hank Patterson (born Elmer Calvin Patterson; October 9, 1888 – August 23, 1975) was an American actor and musician. He is known foremost for playing two recurring characters on three television series: the stableman Hank Miller on Gunsmoke and farmer Fred Ziffel on both Petticoat Junction and Green Acres. Patterson found plenty of movie work, mainly playing cantankerous types as well as blacksmiths, hotel clerks, farmers, shopkeepers and other townsmen, usually bit roles and character parts in Republic Pictures westerns, and then in popular juvenile TV westerns such as The Cisco Kid, The Adventures of Kit Carson, The Lone Ranger, and Annie Oakley. Patterson played recurring or different roles in adult/family TV westerns, including the role of "Hank Miller" in 33 episodes of Gunsmoke from 1962 through 1972, on Have Gun-Will Travel (eleven episodes), Death Valley Days (nine episodes), Tales of Wells Fargo (seven episodes), Maverick (four episodes), Cheyenne (four episodes), Wagon Train (three episodes), Daniel Boone (three episodes), The Virginian (two episodes), The Rifleman, Bonanza, and in episodes of Lawman, Bat Masterson, The Restless Gun, and many others. He made additional TV appearances, including three episodes of The Twilight Zone as well as Perry Mason, Burke's Law, The Untouchables, Judd for the Defense, My Three Sons, and in later years The Mod Squad and Love, American Style.Highway Patrol. In 1963 Patterson first appeared in what would become a recurring role as farmer Fred Ziffel on the popular CBS rural comedy Petticoat Junction. In 1965 CBS debuted another rural comedy, Green Acres. Both series were set in the mythical farming community of Hooterville, with characters from Petticoat Junction often also appearing in Green Acres, including Patterson's Fred Ziffel character. It was on the popular, irreverent Green Acres that Patterson earned his greatest fame. In 1965 and 1966—two of the years in which the two series ran concurrently—Patterson frequently appeared in both shows in the same week on primetime. The association of Patterson's character with the popular character Arnold, the pet pig whom Fred and his wife Doris treated as a son, ensured Patterson a place in TV history. Arnold attended school, watched TV and was a talented artist, piano player, and actor. He even "talked" (snorted, grunted and squealed) in a language that everyone in Hooterville seemed to understand except Oliver Wendell Douglas (Green Acres co-star Eddie Albert). According to westernclippings.com "Characters and Heavies" by Boyd Magers, "Ironically, by the time Patterson was doing 'Green Acres' he was in his late 70s and almost completely deaf, but the producers loved his portrayal so much they worked around his hearing impairment by having the dialogue coach lying on the floor out-of-shot tapping Hank's leg with a yardstick as a cue to speak his line."