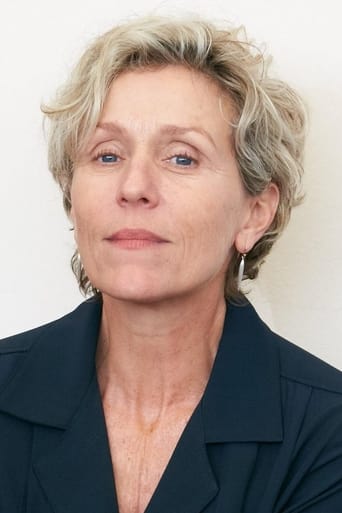 An American film, stage and television actress. McDormand began her career on stage and made her screen debut in the 1984 film Blood Simple, having since appeared in several theatrical and television roles. McDormand has been recognized for her performances in 'Mississippi Burning' (1988), 'Short Cuts' (1993), 'Fargo' (1996), 'Wonder Boys' (2000), 'Almost Famous' (2000), 'North Country' (2005), 'Moonrise Kingdom' (2012), 'Hail, Caesar!' (2016) and 'Three Billboards Outside Ebbing, Missouri' (2017). Throughout her career, she has been nominated for eight Golden Globes, five Academy Awards, four BAFTA Awards, and three Emmy Awards. She is one of the few performers to achieve the "Triple Crown of Acting", winning an Academy Award, a Primetime Emmy Award, and a Tony Award. She won her first Academy Award for Best Actress in 1997 for her role as Marge Gunderson in 'Fargo'.  She also won Best Supporting Actress from the Broadcast Film Critics Association, the Florida Film Critics Circle, and the Los Angeles Film Critics Association for her performance in 'Wonder Boys' (2000). McDormand returned to the stage in the David Lindsay-Abaire play Good People on Broadway from February 8, 2011 to April 24, 2011. In 2017, McDormand starred in 'Three Billboards Outside Ebbing, Missouri' which earned her a second Academy Award for Best Actress. McDormand has been married to filmmaker Joel Coen since 1984, they reside in New York City along with their adopted son Pedro.