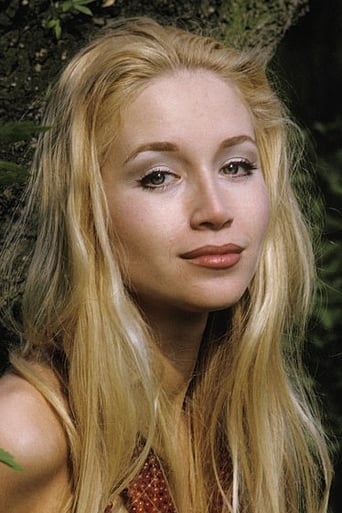 One could have thought Lyne Chardonnet had been blessed by the gods and would live a long successful happy life. For she really had everything to make it. A wasp-waisted blond-haired girl of radiant beauty, with a good drama training, she should have become a movie star and she would have been one if she had been born twenty years before, that is before the French New Wave set new standards, when ingénues like her were still in demand. Well, she WAS given one or two parts which gave her the opportunity to shine, such as the Jacotte she nicely portrayed in Michel Deville's elegant 'Benjamin' alongside Pierre Clémenti as virgin Benjamin and Michel Piccoli as his mentor (1967), or tragic Marie Vetsera's younger sister in Terence Young's version of 'Mayerling' (1968). However, despite this encouraging debut, roles soon dwindled to next to nothing: a few brief appearances as a blond hostess, a blond secretary or even as a (blond?) nun! Lyne Chardonnet sure deserved better. She had born in Paris in the last years of World War II to a fakir, Léopold Chardonnet, and his wife, Ellen Shapiro, of Irish origin. At the age of five, Lyne was already taking dancing lessons.