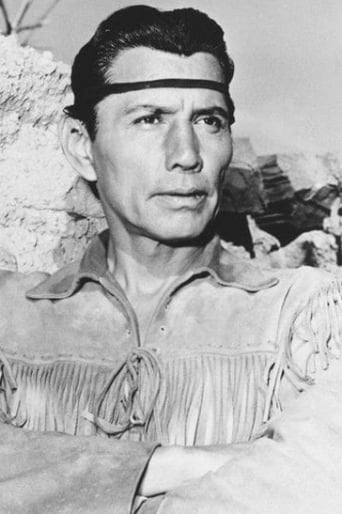 Jay Silverheels was born on a reservation in Canada to a Mohawk chief. He was a star lacrosse player and a boxer before he entered films as a stuntman in 1938. He worked in a number of films though the 1940s before he gained some notice as the Osceola brother in Humphrey Bogart's film Key Largo (1948). Most of his roles consisted of bit parts as "Indian." In 1949, he would work in a movie called The Cowboy and the Indians (1949) with another "B movie" actor named Clayton Moore. It was later that same year that Jay would be hired to play the faithful Indian companion, Tonto, in the television series "The Lone Ranger" (1949). This role, while still playing the "Indian," would bring Jay the fame that his motion picture career never did. As Tonto, on his horse Scout, Jay could show up where the Ranger could not and some of the time he would be shot at or beat up for his trouble. Jay would play Tonto in all the episodes except for those that he missed when he had his heart attack. In those episodes, he was replaced by the Ranger's nephew, Dan. However, Clayton Moore would miss the third season when he was replaced by John Hart. Jay would reprise the role of Tonto in two big-screen color movies with Moore, The Lone Ranger (1956) and The Lone Ranger and the Lost City of Gold (1958). After the series ended in 1957, Jay could not escape the typecasting of Tonto. He would continue to appear in an occasional film and television show, but he would become a spokesman to improve the portrayal of Indians on TV.