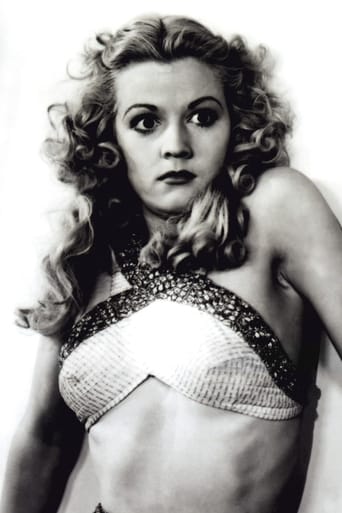 Jean Rogers, born Eleanor Dorothy Lovegren, was an American actress who starred in serial films in the 1930s and low–budget feature films in the 1940s as a leading lady. She is best remembered for playing Dale Arden in the science fiction serials Flash Gordon and Flash Gordon's Trip to Mars. She graduated from Belmont High School, and had hoped to study art, but in 1933, she won a beauty contest sponsored by Paramount Pictures that led to her career in Hollywood. Rogers starred in several serials for Universal between 1935 and 1938, including Ace Drummond and Flash Gordon. Rogers was one of seven women chosen out of 2,700 passengers on excursion boats and ferries who were interviewed for roles in Eight Girls in a Boat. The group began work in Hollywood on September 3, 1933. By 1937, Rogers was the only one of the seven featured as an actress. Rogers was assigned the role of Dale Arden in the first two Flash Gordon serials. Buster Crabbe and Rogers were cast as the hero and heroine in the first serial, Flash Gordon, and Rogers' beauty, long blonde hair, and revealing costumes endeared her to moviegoers. The evil ruler Ming the Merciless lusted after her, and Gordon was forced to rescue her from one situation after another. While filming the series in 1937, her costume caught fire and she suffered burns on her hands. Co-star Crabbe smothered the fire by wrapping a blanket on her. In the first serial, Arden competed with Princess Aura for Gordon's attention. Rogers' character was fragile, small-chested, diminutive, and totally dependent on Gordon for her survival; Lawson's Princess Aura was domineering, independent, voluptuous, conniving, sly, ambitious, and determined to make Gordon her own. The competition for Gordon's attention is one of the highlights of the film. In Flash Gordon's Trip to Mars, the second serial, Rogers sported a totally different look. She had dark hair and wore the same modest costume in each episode. Rogers matured after the first serial, and no sexual overtones are seen in Trip to Mars. Rogers told writer Richard Lamparski that she was not eager to do the second serial and asked her studio to excuse her from the third. Despite starring in serial films, Rogers felt she was not going to improve her career unless she could participate in feature films. She discovered that it was more tedious working in feature films. She played John Wayne's leading lady in the 1936 full-length motion picture Conflict and co-starred with Boris Karloff in the horror film Night Key the following year. During the 1940s, Rogers appeared solely in feature films, including The Man Who Wouldn't Talk with Lloyd Nolan, Viva Cisco Kid with Cesar Romero as the Cisco Kid, Design for Scandal with Rosalind Russell and Walter Pidgeon, Whistling in Brooklyn with Red Skelton, A Stranger in Town with Frank Morgan, Backlash, and Speed to Spare with Richard Arlen. Still, she was unhappy with the studios, possibly because she was relegated to B-movie productions on a lower salary. She decided to freelance with companies such as 20th Century Fox and MGM. Her last appearance was in a supporting role in the suspense film The Second Woman, made in 1950 by United Artists. She died in Sherman Oaks in 1991 at the age of 74 following surgery. She was later cremated and her ashes returned to her family.