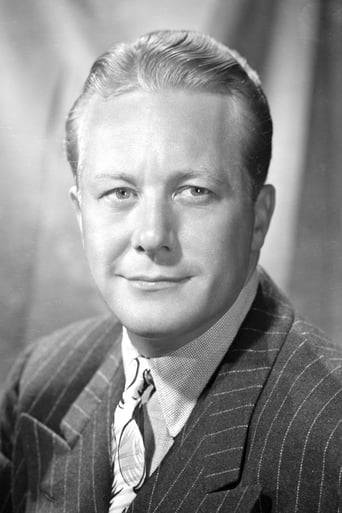 Gene Raymond, born Raymond Guion, was an American film, television, and stage actor of the 1930s and 1940s. In addition to acting, Raymond was also a composer, writer, director, producer, and decorated military pilot. His screen debut was in Personal Maid (1931). Another early appearance was in the multi-director If I Had a Million with W. C. Fields and Charles Laughton. With his blond good looks, classic profile, and youthful exuberance — plus a name change to the more pronounceable "Gene Raymond" — he scored in films like the classic Zoo in Budapest with Loretta Young, and a series of light RKO musicals, mostly with Ann Sothern. He wrote a number of songs, including the popular "Will You?" which he sang to Sothern in Smartest Girl in Town. His wife, Jeanette MacDonald, sang several of his more classical pieces in her concerts and recorded one entitled "Let Me Always Sing". His most notable films, mostly as a second lead actor, include Red Dust (1932) with Jean Harlow and Clark Gable, Zoo in Budapest with Loretta Young, Ex-Lady with Bette Davis, Flying Down to Rio with Dolores del Río, Fred Astaire and Ginger Rogers, I Am Suzanne with Lilian Harvey, Sadie McKee with Joan Crawford, Alfred Hitchcock's Mr. and Mrs. Smith with Carole Lombard and Robert Montgomery, and The Locket with Laraine Day, Brian Aherne, and Robert Mitchum. MacDonald and Raymond made one film together, Smilin' Through, which came out as the U.S. was on the verge of entering World War II. After service in the United States Army Air Forces Raymond returned to Hollywood. He wrote, directed and starred in the 1949 film Million Dollar Weekend. In later years he appeared in only a few films. His last major film was The Best Man in 1964 with Henry Fonda and Cliff Robertson. In the 1950s he mostly worked in television, appearing in Playhouse of Stars, Fireside Theatre, Hollywood Summer Theater and TV Reader's Digest. In the 1970s he appeared on ABC Television Network's Paris 7000 and had guest roles in The Outer Limits, Robert Montgomery Presents, Playhouse 90, The Man from U.N.C.L.E., Ironside, The Defenders, Mannix, The Name of the Game, Lux Video Theatre, Kraft Television Theatre and U.S. Steel Hour. Description above from the Wikipedia article Gene Raymond, licensed under CC-BY-SA, full list of contributors on Wikipedia.