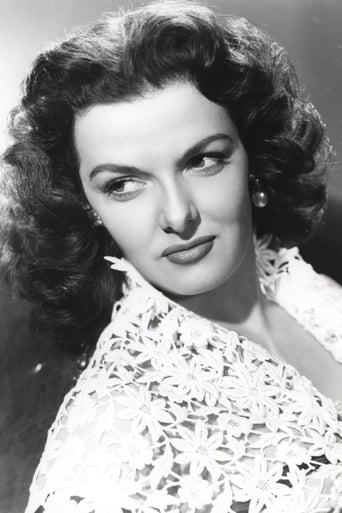 From Wikipedia, the free encyclopedia Jane Russell (June 21, 1921 – February 28, 2011) was an American film actress and was one of Hollywood's leading sex symbols in the 1940s and 1950s. Russell moved from the Midwest to California, where she had her first film role in 1943 with The Outlaw. In 1947, Russell delved into music before returning to films. After starring in multiple films in the 1950s, Russell again returned to music while completing several other films in the 1960s. She starred in over 20 films throughout her career. Russell married three times and adopted three children and, in 1955, founded the World Adoption International Fund. For her achievements in film, she received several accolades including having her hand and foot prints immortalized in the forecourt of Grauman's Chinese Theatre and a star on the Hollywood Walk of Fame. Description above from the Wikipedia article Jane Russell, licensed under CC-BY-SA, full list of contributors on Wikipedia.