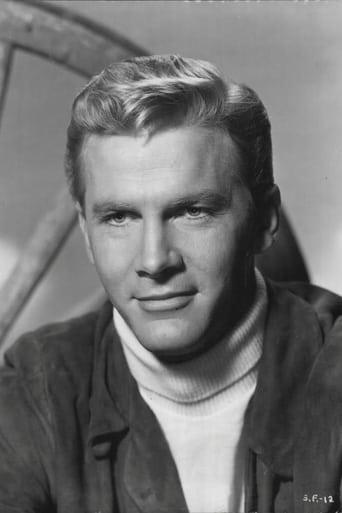 A ruggedly handsome action man of the 1960's and 70's, Steve Forrest began his screen career as a small part contract player with MGM. A brother of star Dana Andrews, he was born William Forrest Andrews, the youngest of thirteen children. His father was a Baptist minister in Huntsville, Texas. In 1942, Steve enlisted in the U.S. Army, rose to the rank of sergeant and saw action at the Battle of the Bulge. Following his demobilisation, he visited his brother in Hollywood and came to the conclusion that acting wasn't a bad way to make a living (having already done some work as a movie extra). He went on to study in college at UCLA, eventually graduating in 1950 with a B.A. Honours Degree in theatre arts. He then served a brief apprenticeship as a carpenter, prop boy and set builder at San Diego's La Jolla Playhouse, where he was discovered by resident actor Gregory Peck and given a small part as a bellboy in the cast of the summer stock production of "Goddbye Again". A subsequent screen test led to a contract with MGM and resulting employment as second leads, brothers of the titular star, toughs and outlaws. His first proper recognition was being awarded 'New Star of the Year' by Golden Globe for his role in So Big (1953), a drama based on a Pulitzer prize-winning novel by Edna Ferber. From the mid-1950's, the rangy, 6-foot-3 actor became much in-demand on TV, beginning with classic early anthology and western series, interspersed with occasional appearances on the big screen (notably, in The Longest Day (1962) and as Joan Crawford's lover/attorney Greg Savitt in Mommie Dearest (1981)). In addition to numerous guest roles, he was regularly featured in series like Gunsmoke (1955), Dallas (1978) (as Wes Parmalee, who believes himself to be lost Ewing patriarch Jock) and Murder, She Wrote (1984). Already from the mid-60's, he decided to pick his assignments more carefully. In order to shed his image as the perpetual bad guy, he had relocated his family to England to star as antique-dealer-cum-undercover intelligence agent John Mannering in BBC's The Baron (1966). He followed this by another starring role as the stoic, tough Lieutenant Dan 'Hondo' Harrelson in the short-lived ABC police drama series S.W.A.T. (1975), possibly his best-remembered role. Steve later lampooned his screen personae in the satirical Amazon Women on the Moon (1987). In private life, Steve Forrest was known as a skilled golfer, lover of football and (according to 1970's newspaper articles) as a dedicated amateur beekeeper.