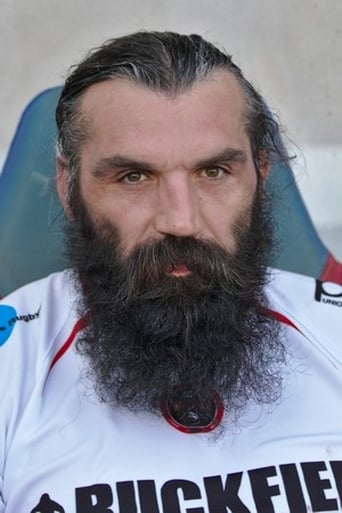 Sébastien Chabal (born 8 December 1977) is a French former rugby union player. He played number eight and lock for Bourgoin (1998–2004), Sale Sharks (2004–2009), Racing Métro 92 Paris (2009 – February 2012), and for the French national team. Chabal played professionally for 16 years and won the English Premiership with Sale, and the 2007 Six Nations Championship with France. He also finished in fourth place at the 2007 Rugby World Cup. He earned his first international cap on 4 March 2000 against Scotland, and represented France in 62 games. He is known for his full beard, long hair and ferocious tackling, leading the French rugby fans to nickname him l'Homme des Cavernes (Caveman). With this look, he has a number of lucrative commercial contracts. He was one of the most popular sportsmen in France, so much that local journalists wrote about Chabalmania. ... Source: Article "Sébastien Chabal" from Wikipedia in english, licensed under CC-BY-SA 3.0.