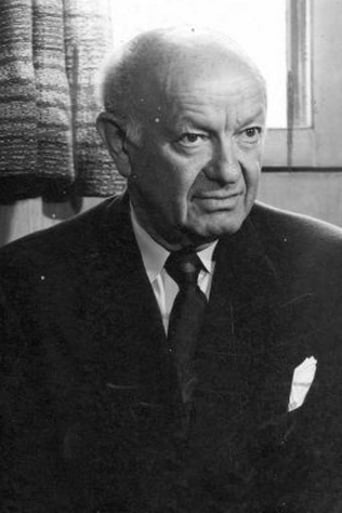 Elihu "Elye" Tenenholtz was born in the Russian hamlet of Azran, near the city of Rovne, in 1887 and came to the US at the age of ten. His first appearance in amateur Yiddish theatricals occurred in 1903, in staged readings of the works of Yiddish author Sholom Aleichem, the first person to do that. He augmented his theater appearances by writing for and editing a Yiddish satirical magazine under the pen-name "Moishe McCarthy". In 1916 he made the leap to the professional Yiddish stage and, befriended by the great doyenne Bessie Thomashevsky, helped her pen her memoirs, the first publication documenting a Yiddish actor's life. By 1920 he was appearing on both the Yiddish art stage with Maurice Schwartz and on Broadway, quickly rising to the top leadership of the Hebrew Actors' Union, the first arts union in America. In 1925 he co-founded a theater company with Celia Adler, half-sister of Luther Adler and "Method" teacher Stella Adler. In 1926 he was summoned to Hollywood and given a five-year contract at MGM. Like most Jewish actors, when he arrived in Hollywood he changed his name (choosing to bifurcate it into "Tenen Holtz"). During that time he regularly appeared in films alongside such stars as Greta Garbo, Norma Shearer, Joan Crawford, Jean Harlow and Marion Davies and under directors like King Vidor and Victor Fleming. This period would prove to be Tenenholtz's most prolific and would account for the majority of the 50+ films in which he would appear. While in Hollywood he helped jump start its fledgling Yiddish theater, founding a popular Yiddish theater company that included other transplanted Yiddish actors including Muni Weisenfreund (aka Paul Muni, father and son Rudolph Schildkraut and Joseph Schildkraut. When his contract at MGM ended, he moved over to Warner Brothers where he made films with Leslie Howard under the direction of Michael Curtiz. By the late 1930s the only calls he got were from Poverty Row studios, so Tenenholtz moved to nearby Monrovia and opened a chicken ranch. Though he would occasionally go back in front of the camera, he retired from film. By the time TV emerged, he landed a few roles on shows such as Perry Mason (1957) and Alfred Hitchcock Presents (1955). He died in 1971.