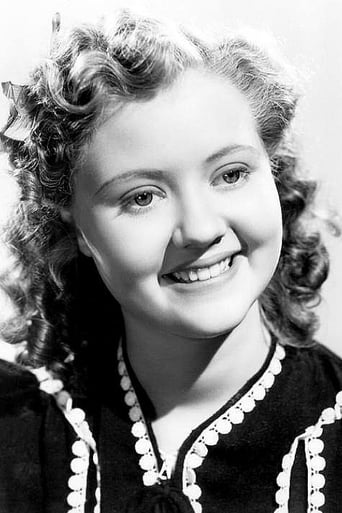 Marcia Mae Jones was born on August 1, 1924, to an acting family. Her mother, Freda Jones, was an actress, and all three of her siblings - Margaret Jones, Macon Jones, and Marvin Jones - were child actors. But Marcia Mae had the most successful career, and she was the only one of her siblings to become a child star. She made her acting debut when just six months old, when director James Cruze saw her in her baby carriage and immediately cast her as the baby in his film Mannequin (1926). Her first major role was in Night Nurse (1931), in which she played a sick child that a sinister hospital staff was trying to murder. By age 10, Marcia Mae had appeared in several dramatic films. In 1936, she played a terrified victim of school bullying in These Three (1936), a role that brought her much attention. In 1937, she played the crippled Klara in Heidi (1937). The film starred two other child actors, Delmar Watson and Shirley Temple. Despite a four-year age difference, Marcia Mae and Shirley acted well with each other, and they appeared together again in The Little Princess (1939). Besides Shirley Temple and Delmar Watson, Marcia Mae worked with several other child stars of the 1930s, including Jane Withers, Bonita Granville, Jackie Moran, Sybil Jason, and her favorite, Jackie Cooper. Marcia Mae's film career began to slow down in the early 1950s, after which she largely appeared in television roles. Her adult life was marred by the suicide of her second husband, Bill Davenport, and problems with alcohol. She eventually conquered her alcohol dependency and became a member of the Academy of Motion Picture Arts and Sciences. Marcia Mae Jones died on 2 September 2007 in Woodland Hills, Los Angeles, California.