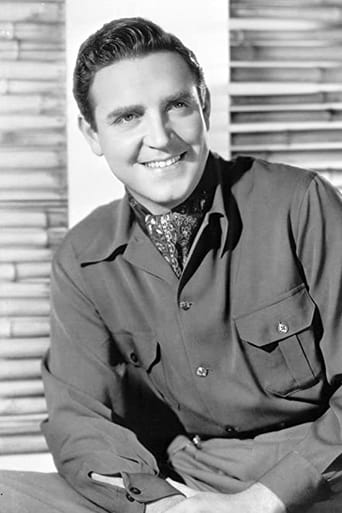 Robert Paige (born John Arthur Page December 2, 1911 in Indianapolis, Indiana, died Dec 21,1987) was a TV star and Universal Pictures leading man who made 65 films in his lifetime and was the only actor ever allowed to sing on film with Deanna Durbin (in 1944's Can't Help Singing). He was a graduate of West Point and was related to Admiral David Beatty, hero of the World War I Battle of Jutland. Paige began his screen career in 1934. His handsome features and assured speaking voice earned him prominent roles in motion pictures, such as Cain and Mabel with Clark Gable and Marion Davies. In 1936, to avoid confusion with another rising leading man, John Payne, Paige briefly adopted the screen name "David Carlyle." He worked primarily for Warner Brothers and Republic Pictures during this period. In 1938 he signed a contract with Columbia Pictures, which changed his screen name to Robert Paige. Columbia cast him in "B" features and starred him in one serial, Flying G-Men. When the Columbia contract lapsed, Paige moved to Paramount Pictures and finally found a home in 1941 at Universal Pictures. Robert Paige quickly became one of Universal's reliable stars, playing romantic leads. He is prominent in many of Universal's comedies and musicals, including those of Abbott and Costello, Olsen and Johnson, Gloria Jean, and Hugh Herbert. He had a good singing voice and a flair for comedy, and the studio capitalized on these talents. Beginning in 1943 Universal gave Paige important roles in its biggest productions, but by then he was so established as a B-picture lead that he never quite graduated to mega-stardom. Paige, along with other contract players, left Universal after a corporate shakeup in 1946. He became an independent film producer in 1947 and entered the new field of television. He was the last permanent host of NBC's variety series The Colgate Comedy Hour, and won an Emmy in 1955 for "Best Male Personality" (a category that no longer exists). In the 1960s he became a TV newscaster in Los Angeles. Paige continued to work in occasional films through 1963; his last two films were The Marriage-Go-Round (1961) and Bye Bye Birdie (1963). From 1966 to 1970 Paige was a newscaster and political correspondent for ABC News in Los Angeles. He left the news desk to become Deputy Supervisor of Los Angeles under Baxter Ward, and then moved into the public relations field. He retired in the late 1970s. Robert Paige died suddenly of an aortic aneurysm in 1987.