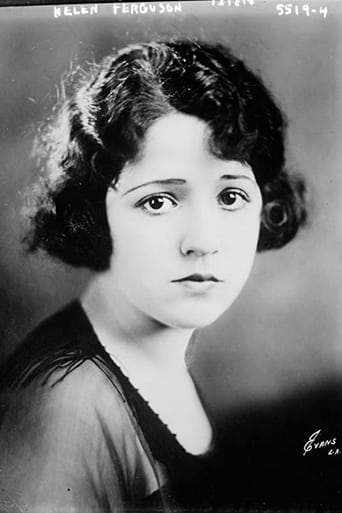 From Wikipedia Helen Ferguson (July 23, 1901 – March 14, 1977) was an American actress later turned publicist. Born in Decatur, Illinois in 1901, she graduated from Nicholas High School of Chicago and the Academy of Fine Arts. Ferguson was a newspaper reporter before entering the motion picture field. It is thought she made her debut in films in 1914, although her first recorded credits are in 1917. She soon starred in roles for Fox Film Corporation by 1920, which is when her career really took off with films such as Hungry Hearts (1922) for Samuel Goldwyn. She was cast mostly in westerns, comedies, and serials. She was selected as a WAMPAS Baby Stars in 1922. She married actor William Russell in 1925, but he died in 1929. The following year, she married wealthy banker Richard L. Hargreaves. Following her second marriage, she left films to concentrate on stage work, though she only received minimal success in this medium. In 1933, she left acting altogether to focus on publicity work, a job she became very successful in and which made her a major power in Hollywood, because she was representing such big name stars as Henry Fonda, Barbara Stanwyck, and Robert Taylor, among others. Ferguson represented actress Loretta Young for more than nineteen years. She kept reporters from needlessly disturbing Young and was considered one of the foremost "suppress agents" in Hollywood. In 1941, her second husband died, and she retired from publicity work in 1967. She died in Clearwater, Florida in 1977, aged 75. She is buried at Forest Lawn Glendale in Glendale, California. Helen Ferguson has a star on the Hollywood Walk of Fame for her contributions to Motion Pictures at 6153 Hollywood Blvd.