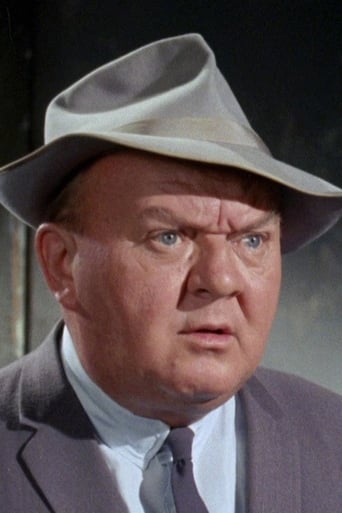 From Wikipedia, the free encyclopedia George Cisar (July 28, 1912 — June 13, 1979) was an American actor who performed in more than one hundred roles in two decades as a character actor in film and television, often in prominent Hollywood productions. He frequently played background parts such as policemen or bartenders. In 1949, Cisar co-starred with a young Mike Wallace in the short-lived police drama Stand By for Crime. Among Cisar's more frequent roles was from 1960 to 1963 as Sgt. Theodore Mooney in thirty-one episodes of CBS's Dennis the Menace. Oddly, series co-star Gale Gordon took the name "Theodore Mooney" and added the middle initial "J." for his character, Theodore J. Mooney, a tough-minded banker on Lucille Ball's second sitcom, The Lucy Show.[1] Cisar portrayed character Donald Hollinger's father in That Girl, the Marlo Thomas sitcom which aired on ABC, and Cyrus Tankersley on CBS's The Andy Griffith Show and its sequel Mayberry, R.F.D. Unbilled in his first film, 1948's Call Northside 777, he was credited at the bottom of the cast list in his next feature, 1949's Johnny Holiday. His final film appearance, also near the end of the list, was as Joe the barber in the 1970 Southern racial drama, ...tick...tick...tick.... Nine years later, Cisar died in Los Angeles, at the age of 66 CLR