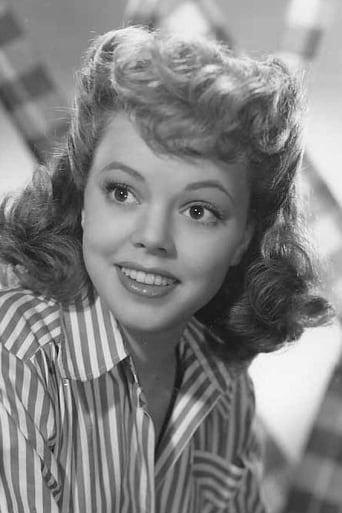 One of MGM's more vivacious secondary stars during the 40s, petite and lovely Jean Porter was born in Texas in 1925 but left the state while young to pursue her dream as an actress. Following some vaudeville experience, she made her uncredited film debut in 1939 (age 14) and slowly graduated to sweet-natured ingénues in light, wholesome "B" fare. Most were sentimental trifles, such as Andy Hardy's Blonde Trouble (1944)and Easy to Wed (1946), or western action with such obvious titles as Heart of the Rio Grande (1942) and Home in Wyomin' (1942). Despite her promise and talent, none of her approximately 30 films managed to set her apart and top stardom remained elusive. Jean's finest screen roles probably came with The Youngest Profession (1943) and Till the End of Time (1946), where she met future husband, director Edward Dmytryk. They married in 1948 and had three children: Richard, Victoria and Rebecca, the latter becoming a wildlife rescuer and rehabilitator. Not long into their marriage, Dmytryk was branded a Communist as one of the "Hollywood Ten" (he was admittedly once a member of The American Communist Party) and the next decade or so would be a dark period of time for them. Unable to work, the blacklisted director moved his family to England where he found some employment. In 1951, however, Dmytryk decided to return to the States and was jailed for six months before giving testimony and being granted a reprieve. As a result, he was allowed to return to directing. Jean's last film, in fact, would be The Left Hand of God (1955) starring Humphrey Bogart and Gene Tierney, which was directed by her husband. Throughout their ordeal Jean and Edward remained a loyal couple and in later years wrote a book together "On Screen Acting" in 1984. Happily married until his death at age 90 of heart and kidney failure in 1999, Jean continues to be a regular attendee of film-related events and a by-line contributor for "Classic Images," the popular magazine for old-styled film fans, in which she reminisces of Hollywood back then. Date of Birth 8 December 1922, Cisco, Texas