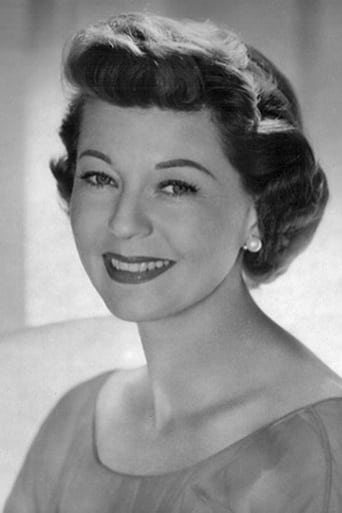 Harriet Nelson will always have a secure place alongside Barbara Billingsley and Jane Wyatt in the "TV's Golden Age Mom Hall of Fame." For fourteen years, she, husband Ozzie Nelson, and their two boys, David Nelson and Ricky Nelson, were the quintessential role models of the '50s ideal nuclear family. Harriet, the daughter of actors, was practically born in a trunk. She made her debut amid the footlights at age 6 weeks with her parents. The Iowa beauty attended St. Agnes Academy in her early years. Quite a dazzler in her youth, she was playing vaudeville when she attracted the attention of saxophone-playing Ozzie Nelson and was hired by him as vocalist for his orchestra in 1932. They married three years later. Harriet had a bold, sassy edge to her that proved a perfect counterpoint to Ozzie's genial, stumbling personality in their off-the-cuff routines. During the '40s, they were regulars on Red Skelton's radio show and even took over the comic's time slot when Red was drafted into the army. As Harriet Hilliard, she moved to leading lady status in a number of cool, snazzy war-era musicals, the most notable as "second lead" to Fred Astaire and Ginger Rogers in Follow the Fleet (1936). Other minor efforts included Cocoanut Grove (1938), Sweetheart of the Campus (1941) with Ozzie, Juke Box Jenny (1942), and Honeymoon Lodge (1943), also with Ozzie. Breezy, tuneful films, but nothing to write home about. Once Harriet partnered with Ozzie in their own radio series "The Adventures of Ozzie and Harriet" in 1944, the family-oriented woman's career became unequivocally bound to his. They extended their devoted radio audience to TV (1952-1966). The Adventures of Ozzie & Harriet (1952), which now included both their sons, made household names of the entire clan. David followed in his father's footsteps as director/producer, while Ricky turned pop teen idol with such hits as "Hello, Mary Lou" and "Travelin' Man," songs that were introduced on the show. Following the show's long run, Ozzie and Harriet lay back a bit and settled in Laguna Beach, California, touring occasionally on stage. A second series entitled Ozzie's Girls (1973) lasted only one season. Following Ozzie's death in 1975, Harriet turned somewhat reclusive, save for a few mini-movies or guest spots. She never fully recovered from son Ricky's death in a plane crash in 1985. She was the doting grandmother of actress Tracy Nelson and of twin rockers Matthew Nelson and Gunnar Nelson, who were simply called "Nelson." A heavy smoker most of her life, she never smoked in public, feeling it did not befit her "perfect mom" image. She died of emphysema and congestive heart failure in 1994.