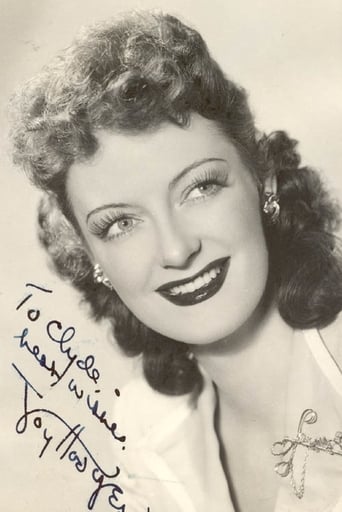 Joy Hodges, born Frances Eloise Hodges, was an American singer and actress who performed on radio, on film, on Broadway, and with big bands. Winning a contest at a theater took Hodges to Chicago, where her national career began. From there, she traversed the United States, singing on the radio, in night clubs, with orchestras, and in Chautauqua programs. She performed at the Empire Room and the Hotel Sherman, both in Chicago. One of her early jobs was being the lead singer with Carol Loftner and his orchestra. She also sang with Ted Fio Rito, Ben Bernie, Jimmy Grier, Ozzie Nelson, and Abe Lyman and their orchestras, among others. Hodges' Broadway credits include Nellie Bly, The Odds on Mrs. Oakley, Dream with Music, and I'd Rather Be Right. In 1972, she replaced Ruby Keeler in the revival of No, No, Nanette on Broadway. Perhaps the most memorable of Hodges' Broadway performances was singing "Have You Met Miss Jones?" in I'd Rather Be Right. She later said, "I became the toast of Broadway and sang the most recognizable song in America at that time — everyone adored Miss Jones." Her screen debut came in a short, A Night at the Biltmore Bowl, for RKO Pictures, and her first film, after signing with RKO for five years, was Old Man Rhythm. She also made soundies (musical short films) in addition to regular films. During World War II, Hodges sang with Harry James and his orchestra as they entertained military personnel on USO tours in Europe. On old-time radio, Hodges was the female singer on The Joe Penner Show. She left that program to make her stage debut in I'd Rather Be Right. In 1944, she filled in for Arlene Francis as host of the radio version of Blind Date when it was broadcast from Detroit. She also sang and was co-host, with Durward Kirby, on Honeymoon in New York.