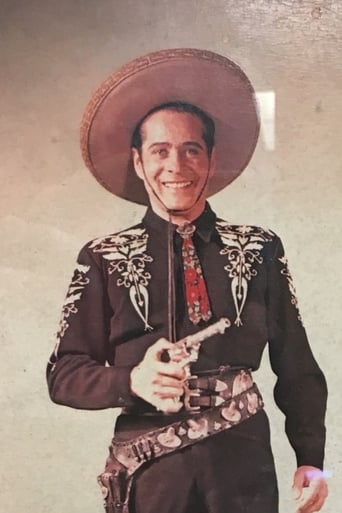 To most audiences, Duncan Renaldo will always be identified as film and TV's "The Cisco Kid." However, this role occurred late in his career, which consisted of much more than just this western character. Not much is known about Renaldo's early life. In fact, his date and place of birth is still questioned. The usual given birth date is April 23, 1904. His birthplace has been generally stated as Spain--he has said that his first memories as a child were in Spain--although Romania and even New Jersey have been mentioned as well. An orphan, he never knew his actual parents and was never able to ascertain the exact date and place of his birth. He was raised and educated in various European countries and arrived in the US in the early 1920s as a stoker on a Brazilian coal ship. Entering the country on a 90-day seaman's permit, he stayed when his ship caught fire at the dock and burned to the waterline. A paltry existence as a portrait painter forced him to seek other work, and he somehow found his way into films as a producer of short features, which in turn led to on-camera work as an actor with MGM in 1928. The studio capitalized on his dashing Hispanic looks and initially typed him as a "Latin lover", but it didn't last long. In the early 1930s his career was interrupted when he was arrested and faced deportation due to his illegal immigrant status. The actor was eventually pardoned by President Franklin D. Roosevelt--his wife, Eleanor Roosevelt, had bought one of Renaldo's paintings, looked into his case and persuaded her husband to pardon him. He returned to minor films for both Republic and Monogram, alternating as heroic sidekick and villain. He co-starred as one of the Three Mesquiteers in the revamped film series, and showed up regularly in 1930s and 1940s cliffhangers, including The Painted Stallion (1937), Jungle Menace (1937), Zorro Rides Again (1937), King of the Mounties (1942), Secret Service in Darkest Africa (1943) The Tiger Woman (1944). In 1945 he began the Cisco Kid film series and transferred the character successfully to TV in the early 1950s, with Leo Carrillo as faithful sidekick Pancho. Renaldo made the character clean-shaven and more of a do-gooder than the roguish bandit who actually was in the books. Renaldo retired soon after the series' demise and died years later at Goleta Valley Community Hospital in California of lung cancer in 1980.