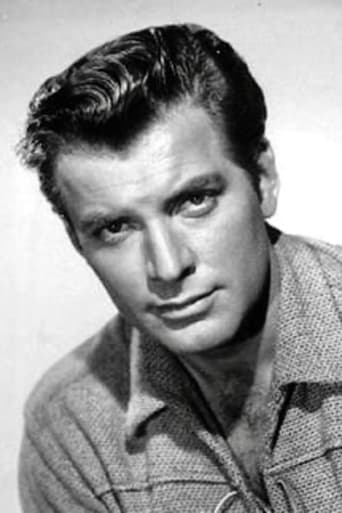 ​From Wikipedia, the free encyclopedia.   John Bromfield (né Farron Bromfield) (June 11, 1922 - September 19, 2005) was an American film and television actor. Bromfield was born in South Bend, Indiana. He played football and was a boxing champion in college. He served in the United States Navy. In 1948, he twice harpooned a whale in the documentary film Harpoon. In 1948, he was cast as a detective in the film Sorry, Wrong Number, starring Burt Lancaster and Barbara Stanwyck for Columbia Pictures. In 1953, Bromfield appeared with Esther Williams in the film Easy to Love set in bathing suit attire in Cypress Gardens, Florida. In the middle 1950s, he appeared in westerns, such as NBC's Frontier anthology series in the role of a sheriff in the episode "The Hanging at Thunder Butte Creek". He also starred in horror films, including the 1955 3D production, Revenge of the Creature, one of the Creature from the Black Lagoon sequels. In 1956, Bromfield was cast as law enforcement officer Frank Morgan in the syndicated western-themed crime drama series, Sheriff of Cochise, later retitled by studio boss Desi Arnaz, Sr., as U.S. Marshal. The real sheriff of Cochise County at the time, Jack Howard, visited the set when the program began and made Bromfield an honorary deputy. Bromfield once told the Los Angeles Times: "About 40 million see 'Sheriff of Cochise' or 'U.S. Marshal' every week. I'd have to do about twenty-five pictures, major pictures, over a span of eight or nine years for enough people to see me in the theater who see me in one week on 'U.S. Marshal'. ... The show is seen all over the world. Television is a fabulous medium." The series was actually created by his co-star Stan Jones (1914–1963), who appeared in twenty-four segments as Deputy Harry Olson. Sheriff of Cochise featured numerous young actors who later became well-known in the industry: Mike Connors, Gavin MacLeod, David Janssen, Michael Landon, Stacy Keach, Charles Bronson, Jack Lord, Doug McClure, Ross Martin, and Martin Milner. In 1960, Bromfield retired from acting to produce sports shows and work as a commercial fisherman off Newport Beach, California. Bromfield was divorced from actresses Corinne Calvet (1925–2001) and Larri Thomas (born 1933). He died at the age of eighty-three of renal failure in Palm Desert, California, having been survived by his third wife of forty-three years, Mary Bromfield. Description above from the Wikipedia article John Bromfield, licensed under CC-BY-SA, full list of contributors on Wikipedia.