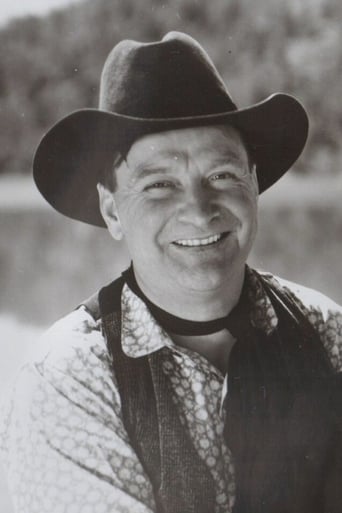 Max Terhune (12 February 1891 Franklin, Indiana, – 5 June 1973 Cottonwood, Arizona), was an American film actor. He appeared in nearly 70 films, mostly B-westerns, between 1936 and 1956. Terhune performed in 21 episodes of The Three Mesquiteers (co-starring with Robert Livingston and Ray "Crash" Corrigan in the Republic series); The Range Busters (24 entries with Ray Corrigan and John King at Monogram Pictures); several supporting roles with Gene Autry (at Republic), and the Johnny Mack Brown westerns at Monogram. Terhune played the comic sidekick (usually named either Lullaby Joslin or just Alibi)--with a major distinction. He always traveled the range with his dummy Elmer sharing his saddle. Terhune was not only a splendid ventriloquist, but a fine magician. Card tricks were his forte, and he often performed such in his movies. His former vaudeville act included juggling and doing impressions, talents also incorporated into his sidekick roles. He joined the National Barn Dance radio program, along with Gene Autry, in 1933. It was Autry who introduced him to Republic Pictures. His last film role was in the major Hollywood film Giant, in which he played the dramatic role of the physician Dr. Walker. Description above from the Wikipedia article Max Terhune, licensed under CC-BY-SA, full list of contributors on Wikipedia.