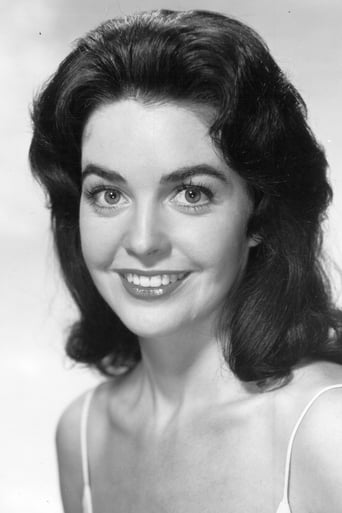 From Wikipedia, the free encyclopedia Myrna Fahey (12 March 1933 - 6 May 1973) was an American actress best known for her role as Maria Crespo in Walt Disney's Zorro, and as Madeline Usher in the film version of Edgar Allan Poe's, The Fall of the House of Usher. She appeared in episodes of 37 television series from the 1950s into the 1970s, including Bonanza, The Time Tunnel, Maverick, Perry Mason, and Batman . Fahey also became the subject of death threats while dating Joe DiMaggio in 1964. The FBI determined the threats came from a patient at the Agnew Mental Hospital in San Francisco, who could not bear to see DiMaggio with anyone other than Marilyn Monroe, who died in 1962. Fahey complained in a 1960 interview that she was being typecast in 'good girl' roles because of what directors called her 'moral overtones' and wanted to play darker and more complicated characters. She'd worked in many Westerns in the late 1950s, usually in the role of the sheriff's daughter, including an appearance on Marshall Dillon in 1957 (the episode entitled: Innocent Broad), which later became Gunsmoke. Her image branched out in the 1960s, helped by House of Usher and a role on the Boris Karloff-hosted TV series Thriller that same year entitled 'Girl With A Secret'. Even her Western parts became darker. After a rough love scene in Bonanza in which she cut her lip, the cast presented her with an award for 'Best Slapper in a Filmed Series'. Fahey's most sustained television work was a starring role in the one-season (1961-62) series Father of the Bride. The series was based upon a film of the same name starring Elizabeth Taylor, and Fahey likely got the role because, as one newspaper reviewer pointed out, she "looks enough like Liz Taylor to be her sister".  Fahey was not flattered by the comparison, however, telling one interviewer "the fact that I'm supposed to look like Elizabeth Whats-Her-Name had nothing to do with my getting [the part], because we don't really look alike I don't think, we just happen to have the same colorings." Fahey wanted to be released from the show even before it came up for renewal, reportedly feeling too much emphasis was being placed on the "father" character and not enough on her "bride" In 1966, she played Blaze in the Batman episodes "True or False Face" and "Holy Rat Race". Fahey was born in Carmel, Maine, near Bangor in 1933, but grew up in Southwest Harbor near Bar Harbor, Maine, where she was a cheerleader at Pemetic High School. She began competing in local beauty pageants in the early 1950s. She acted one season at the Pasadena Playhouse before breaking into TV, and became an avid skier in California. She invested in stocks and one of her contracts stipulated that she have a stock ticker in her dressing room. Besides Joe DiMaggio, she also dated George Hamilton. She died on 6 May 1973 at age 40 at St. Johns Hospital, Santa Monica, California, after a long battle with cancer. She is buried in Mt. Pleasant Cemetery in Bangor, Maine Description above from the Wikipedia article Myrna Fahey, licensed under CC-BY-SA, full list of contributors on Wikipedia.