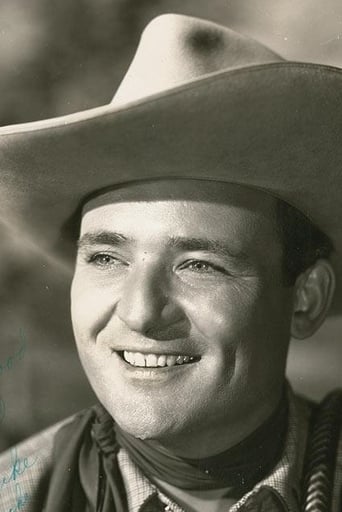 From Wikipedia Whip Wilson (born Roland Charles Meyers June 16, 1911, Granite City, Illinois – October 22, 1964, Los Angeles, California) was an American cowboy film star of the late 1940s and into the 1950s, known for his roles in B-westerns. His first film was alongside Monogram's singing cowboy Jimmy Wakely in the 1948 film Silver Trails, to give him experience in front of the camera. The next year Wilson starred in his own series films, the first being Crashin Thru, followed by Haunted Trails, Range Land and Riders of the Dusk. He first was given a horse named "Silver Bullet", later shortened to "Bullet", then changed to "Rocket" due to Roy Rogers having a dog in his films named "Bullet." Wilson may have come along too late to establish himself as a major star; studios were already phasing out low-budget westerns. Veteran comedian Andy Clyde was a valuable asset as co-star, but the series got little attention. After 12 films, Clyde left the cast, replaced by Fuzzy Knight and later by Jim Bannon. In 1950 Wilson starred in Gunslingers, Arizona Territory, Cherokee Uprising, Fence Riders, and Outlaws of Texas. In 1951 his character continued in Lawless Cowboys, Stage to Blue River, Canyon Raiders, and Abilene Trail. There was nothing novel or original about Wilson to distinguish himself from other cowboy stars. The name of his horse, the bullwhip gimmick, and the false past created by the producers were all derivative. Wilson's career never really took off, and by 1952 his Hollywood career was all but over, with him starring in Night Raiders, with his last film being that same year, titled Wyoming Roundup.