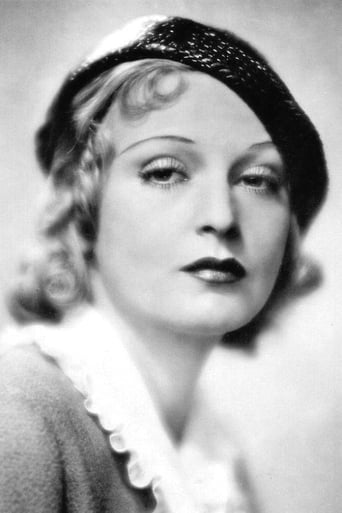 The daughter of a railroad official, Camilla Horn was educated in Germany and Switzerland. She initially trained as a dressmaker and received her first job experience in a fashion salon in Erfurt. This was merely a stepping stone for a performing career which began with dance lessons in Berlin and subsequent acting studies under Lucie Höflich. The lithe, blond and strikingly beautiful Camilla soon appeared in cabaret revues staged by Rudolf Nelson. By 1926, she was employed as an extra at Ufa, where she was spotted by the director F.W. Murnau, who found in her the ideal representation of Gretchen for his seminal production of Fausto (1926) . The role catapulted Camilla to instant stardom. Within a year, she was signed by United Artists in Hollywood, befriending Charles Chaplin and, more importantly, studio chairman Joseph M. Schenck. The friendship with Schenck may, or may not, have led to an affair -- depending on which story one is to believe -- but it did result in two high profile starring roles opposite John Barrymore in the torrid melodramas Tempestad (1928) and Amor eterno (1929), both produced by Schenck. Neither film was a commercial success. With the coming of sound, Camilla returned to Europe, briefly appearing on stage in London and Paris, before resuming her screen career in Germany. As the 1930's went on, she rarely turned down a role, playing anything from baronesses and fashion models, to vamps and 'fallen women'. The quality of her films was variable, but there were several noteworthy standouts, such as Hans in allen Gassen (1930) (opposite Hans Albers), Fiesta en palacio (1934) and Payasos (1938) (as a circus artiste, again with Albers). During this tumultuous decade, Camilla conducted a lengthy affair with the singer Louis Graveure, fifteen years her senior. This came to an end in 1938, when Graveure was suspected of espionage by the Gestapo and fled to England, via the Cote d'Azure. After her luxury villa in Berlin was ransacked in search for non-existent clues, Camilla's outspoken criticism of the Nazi regime reached a point where it got her into serious trouble. She saw out the first half of her career with a trio of long forgotten films made in Italy. Having failed in an attempt to flee to Switzerland, she kept a low profile and even tried her hand at farming. After the war, she had a stint as an interpreter for the occupying U.S. forces in Germany. Camilla made a successful return to the stage in a 1948 Frankfurt production of Jean Cocteau's "L'Aigle a Deux Tetes" (aka 'The Eagle Has Two Heads'). She spent the latter half of her acting career playing grand dames, matriarchs and worldly ladies with colourful backgrounds, in both films and on television. In 1974, she was awarded the 'Filmband in Gold' (also known as 'Lola') for lifetime achievement in the German film industry. In her 1985 autobiography, "Verliebt in die Liebe" ('In Love with Love'), she happily recounted her marriages and liaisons.