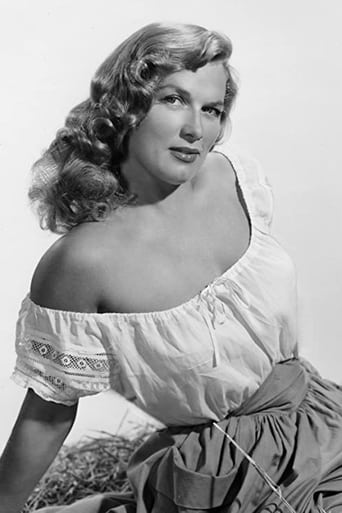 Denise Darcel was a French vaudevillian, actress and singer, who from 1948 through 1963, appeared in films in Hollywood, and briefly on theatre, television and radio. Darcel's debut on the legitimate stage came in 1950, when she appeared in Pardon Our French, premiering October 5th, at the Broadway Theatre. Her first film appearance of note was in Battleground (1949). She made quite an impression in Tarzan and the Slave Girl (1950) opposite Lex Barker, then co-starred with Robert Taylor in Westward the Women (1952) and Glenn Ford in Young Man with Ideas (1952). In 1953, she was seen in the swimming musical Dangerous When Wet, which starred Esther Williams (1953). Her most important film was Vera Cruz (1954) where she played the female lead opposite Gary Cooper and Burt Lancaster. Her last film (1961) was Seven Women from Hell. Darcel appeared on various TV shows in the 1950s. In 1954, she was hostess/MC of Gamble on Love, a summer program on the DuMont Television Network. Darcel asked questions of married couples who sought to win the grand prize of a mink coat. A review in Billboard described her as "Gallic to the point of unintelligibility." Also in 1954, Colonel Productions produced a pilot of Chez Denise, a 30-minute "comedy-intrigue" program starring Darcel, which apparently did not sell. After her film and television career began to wane, Darcel, aged 41, became a stripper, appearing in West Coast theatres in San Francisco, Las Vegas, Oakland, and Los Angeles. She retired from stripping after a few years and returned to the cabaret circuit, making a few appearances on television. In 1991,[she was cast as "Solange La Fitte" in the Los Angeles 20th anniversary revival of the musical Follies, produced by the Long Beach Civic Light Opera. She would later repeat the role of Solange in 1995 for revivals in Houston and Seattle. In September 2009, she was honored with the Cinecon Career Achievement Award, presented in Hollywood at a banquet held at the Hollywood Renaissance Hotel. Prior to the ceremony, a new 35mm color print of her 1953 film, Flame of Calcutta, was screened at the Egyptian Theatre. After the screening, at the banquet, she cheerfully announced to the audience, "I'm back".