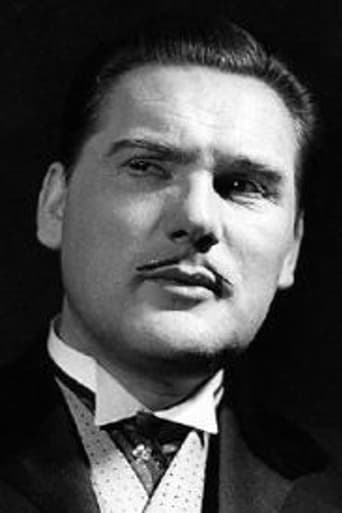 Slovak actor of Italian origin (father Giacomo Di Barbora) was born on November 19, 1916 in Bratislava. František was a great athlete in his youth, he played football for Slovan Bratislava, he was an attacker, he played hockey in the winter - he was a goalkeeper (he represented SLOVAKIA). His father suggested that he not want to be an actor. František listened to him and enrolled at the Academy of Music and Drama in Bratislava. He graduated in 1938. He became a member of the SND at school. In this theater he was not only in drama but also in opera! (1940-42) He performed about 210 theater characters in the play. František Dibarbora also made a name for himself on Slovak radio. He was especially popular in comic scenes, sketches and I remember that as a little boy I listened to his PIRAMID every Sunday morning. František Dibarbora appears in the film as early as 1938 in the film UNBEATED ARMY. After the war, he played in the famous BULKED BORDER. M. Frič also cast him in the film WAR! The "beautiful" 50s came. He mainly "builds" in the films and Dibarbora plays in these films. But even here he shows that he is a comedian. His comedian will appear in films (DAM, FRIDAY 13, ŠTVORYLKA, JOŽKO PÚČIK AND HIS CAREER, ZEMIANSČŤ, HOLIDAY WITH AN ANGEL). They are all comedies and Dibarbora is probably the best Slovak comedian these years. His best comedy of those years is Lack's film ROCK IN THE OFFER. Dibarbora also showed his acting in the characters of German SS men. His role as "Herman Thiele" in the film WOLF HOLES earned him the NATIONAL FILM AWARD (1949). He played a similar character in the film WHILE KOHÚT DOES NOT SING (1969). In the late 1950s, when television began broadcasting, it automatically began to appear in this medium as well. You played many serious but also comic characters here. I will mention a two-part tel. the film THE SOLDIER IN THE FIELD (1964), Ostrich Party (1967), later it was the US TRAGEDY (1976), ESCAPE FROM THE GOLDEN LANDSCAPE (1977) or the series SAFARI (1986), where he got his last major role. Unforgettable and famous is his "pastor Evans" in the production MERRY LADIES FROM WINDSOR. This actor from the capital H, he also taught at the Academy of Performing Arts, was awarded the title of "deserved artist" in 1986. He died as a result of a serious car accident on September 4, 1987 in Bratislava.