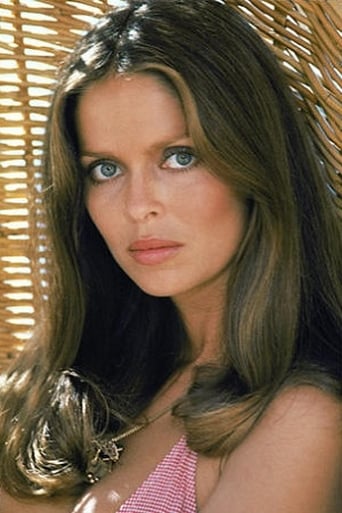 Barbara Ann Goldbach (born August 27, 1947) is an American actress and model. She was born to Howard and Marjorie Goldbach in Queens, New York. Her father was a policeman. Barbara is the oldest of five children. She met her first husband Augusto Gregorini in New York while she worked as a model and he was visiting from Italy for a business trip in 1966. Barbara followed him to Italy to be with him. In 1968, they married. They had two children, Francesca (b. 1969) and Gian Andrea (b. 1972). During Gianni's birth, he had the umbilical cord wrapped around his neck, nearly choking him, and was diagnosed with cerebral palsy, although a later operation improved his condition. While in Italy, Barbara began her acting career, starting with the TV mini-series Odissea in 1968, where she was billed as Barbara Gregorini. Other roles followed in the giallo / horror films Black Belly of the Tarantula and Short Night of the Glass Dolls in 1971, the crime-thrillers Stateline Motel (1973) and Street Law (1974) and other films. In 1975, Barbara and Augusto Gregorini separated when she moved to Los Angeles, California to further her career. The couple would divorce in 1978 and share custody of their two children. As that was going on, Barbara received her most famous role as Russian secret agent Major Anya Amasova / Agent XXX in The Spy Who Loved Me (1977). She returned to Italian cinema in the late 70s for a supporting role in the sci-fi film The Humanoid (1979), starring roles in the horror films The Great Alligator and Screamers (1979) and more, which earned her the "Queen of the B Movies" label by some in the press. In 1979, Barbara was in consideration for the Tiffany Welles role, a replacement for Kate Jackson's character, in Charlie's Angels but ultimately lost out to Shelley Hack due to being deemed too attractive for the role. She then appeared in the comedy Up the Academy (1980), produced by her then-boyfriend Danton Rissner, and played a menaced TV reporter in the sleazy horror film The Unseen (1980). The following year, Barbara met Ringo Starr on the set of Caveman (1981) in 1980, and they became a couple during the filming. Ringo and Barbara were on a holiday in December 1980 when her daughter called to inform them that John Lennon had been shot. Ringo and Barbara went to New York to console Yoko Ono and Sean Lennon. Ringo and Barbara married on April 27, 1981. By their own admission, the couple pretty much partied the 80s away and both entered a rehab clinic in Tucson, Arizona to straighten their lives out in 1988. By then, Barbara's show business career was over. She has since received her Master's degree in psychology from UCLA and focuses on charity work. (Biography By: Jeannette, Pedro and Justin)