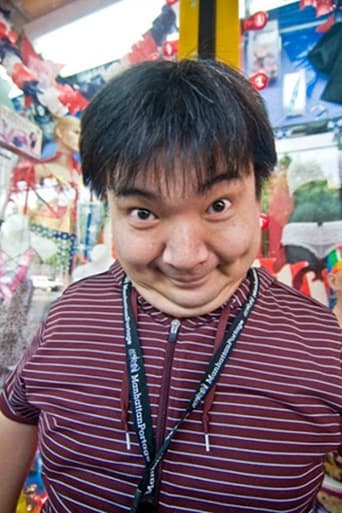 Noboru Iguchi is a Japanese film director, screenwriter and actor. He has worked as a director in adult video (AV) as well as in the horror and gore genres. Iguchi was born on June 28, 1969. In an interview he said he was influenced in his work by the ghost houses and freak shows he went to as a child in Japanese play lands, and that his aim in his films is to both entertain and surprise. In his extensive career as an AV director, Iguchi has worked for a number of studios including CineMagic, Big Morkal, Try-Heart, h.m.p and Soft On Demand (SOD). Nana Natsume and Risa Coda have been among the AV Idols featured in his videos. His videos have explored several of the typical Japanese AV genres, from incest for SOD to "nakadashi", bondage, group sex and some enema fetish videos for CineMagic. His video Final Pussy starring Nana Natsume won the Best Rental Video Award at the 2005 SOD Awards. In this January 2005 video, Natsume's character (as the result of a military experiment gone wrong) has guns burst from her breasts when sexually aroused. The special makeup effects were by Yoshihiro Nishimura. One of Iguchi's early movies was Kurushime-san (クルシメさん) which was first released in 1997. Iguchi was screenwriter, editor, cinematographer and director of the black comedy-horror film which won the Encouragement Prize at the 1998 Yubari International Fantastic Film Festival and starred Aki Arai, Miako Tadano and Tomoko Matsunashi. In 2003, Iguchi wrote and directed the horror comedy A Larva to Love (恋する幼虫, Koi-suru Yōchū) (with effects by Yoshihiro Nishimura) about a strange relationship involving a boy, a girl, and a parasite. Iguchi also wrote and directed the February 2006 film Sukeban Boy or Oira Sukeban (おいら女蛮 スケバン, Oira sukeban) with AV star Asami. At an interview at the New York Asian Film Festival, Iguchi told of an incident where one of the actresses in the movie, completely unaware of her role, balked at doing action scenes totally naked. According to Iguchi "We had to calm her down, capture her, and convince her to do the job ... We made it so she could not leave the set ... [in] America we would have been sued." Later in 2006, Iguchi directed Cat-Eyed Boy (猫目小僧, Nekome kozō) based on the manga by Kazuo Umezu. The movie, with gravure idol Miku Ishida, Asami Kumakiri, Hiromasa Taguchi, Naoto Takenaka and Kanji Tsuda, was released theatrically in Japan in June 2006, and on DVD in October of the same year. Iguchi was also both the screenwriter and director for the 2008 action and gore cult film The Machine Girl (片腕マシンガール, Kataude mashin gāru) where he once again teamed up with Yoshihiro Nishimura who did the special effects and makeup effects. Iguchi said he wanted to make an action movie with a woman fighting and it started with just an idea of a girl losing her arm and going out for revenge and was originally called "One Armed Big Busty Girl" - the machine gun came later. Iguchi was a special guest at the 2009 and 2010 New York Asian Film Festival. In 2010, Iguchi directed his largest-budgeted feature, the action film Karate-Robo Zaborgar, based on the popular 1970s television series Denjin Zaborger. He followed it with the scatological horror/comedy Zombie Ass in 2011.