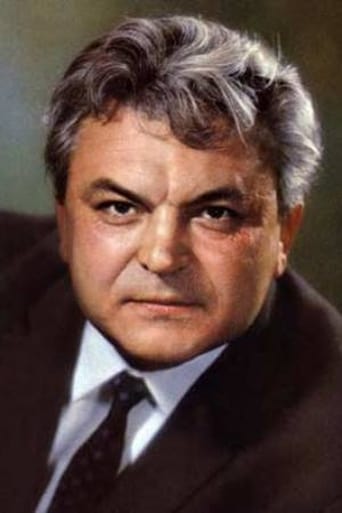 Sergey Bondarchuk (25 September 1920 — 20 October 1994) was a Soviet and Russian director, actor, and screenwriter. People's Artist of the USSR (1952). Academy Awards winner (War and Peace, 1969). BAFTA winner (Waterloo, 1971). His directorial debut was Fate of a Man, a WWII classic where he portrayed the main role. Bondarchuk is considered a master of big scale pieces with epic battle scenes that involved thousands of extras (War and Peace, Waterloo). He was one of the few allowed to collaborate aboard, behind the Iron Curtain. He often starred star in his films, as well as cast his family, notably his wife, actor Irina Skobtseva (e.g. War and Peace, Vybor Tseli, Molchanie Doktora Ivensa). In late 1980s-early 1990s Bondarchuk started his long-term passion project – an adaptation of an epic novel “And Quiet Flows the Don,” together with the UK and Italy; however, the work couldn't be finished before the actor-director passed away in 1994. His son, actor-director Fyodor Bondarchuk, finished the piece in 2006.